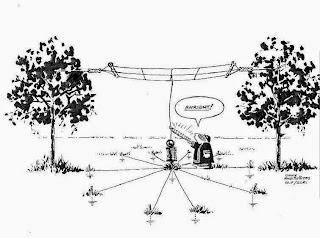 With all commentary periods for the FCC's 'Notice of Proposed Rulemaking' (Docket 15-99) now closed, it appears that one of the last comments to be filed may contain the most powerful arguments in favor of swift implementation.

In its extremely detailed 42-paged submission, the ARRL states, in no uncertain terms, the reasons why access to both the 2200m LF band and the 630m MF band should not be held back and that service rules should be 'finalized'. Indeed the powerful arguments stated in favor of implementation should go a long way in making this happen sooner rather than later.

The FCC's position is that there is little to no evidence to indicate that amateur radio operation on either band would be incompatible with power company PLC systems, going as far as stating that at distances of 1km or more from PLC lines, "there is no chance of interference". Further supporting their claim, the thousands of hours of experimental operation were offered as powerful proof and that the ARRL was “unaware of any reports of interference to PLC systems arising from that operation conducted pursuant to numerous Part 5 experimental licenses…in the large band utilized by PLCs.”

In addition, the ARRL had harsh words regarding the FCC's attempt to legitimize the growing number of fish-net beacons in the 160m band, and pulled no punches regarding their position in this matter.

"The Commission is urged to avoid enacting rules that it has no effective ability or intention to enforce. That fishing vessels have, with impunity, illegally deployed radio buoys in this band on a widespread basis (whether or not due to misrepresentations of the importers and retailers of these devices or due to a disregard of the Commission’s rules generally) without even nominal enforcement actions by the Commission, provides no basis for assuming that there will be compliance with any deployment limitations (including geographic deployment restrictions) on these buoys going forward. Nor is there any basis for the assumption that there will be any enforcement action taken with respect to continued illegal operation of the buoys if and when interference is caused. Spectrum planning by the Commission in this context has to be based on ex ante determinations of compatibility rather than mere assumptions, especially where the record indicates such a low level of historical compliance."

A summary of the comments can be read here in the ARRL News while all comments filed for the NPRM be found here temporarily, while the FCC site is down for maintenance.
at 11:06

Please note that comments for the NPRM are not closed as of yet!! The closing date is Sept 30th. My apologies for any confusion.