Conditions towards the east on LF as well as on the broadcast band (BCB) have taken a positive leap forward over the past few days. Last night, 160m was open to Europe from here, the first opening of the season as far as I am aware. I also spent some time listening to a dozen or more TA (Trans-Atlantic) carriers on the broadcast band, signalling good conditions over the pole finally.The polar skip also extended down into the LF band, as it did the previous night.

In the afternoon hours I started watching for Europe1 on 183kHz, transmitting from western Germany, and was able to see its weak carrier on the Perseus SDR's waterfall display several hours before sunset. Twilight here brought a dramatic improvement in signal strength as shown below. 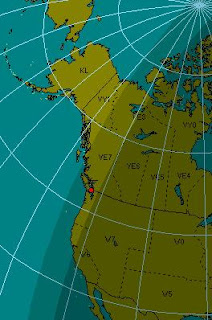 As daylight approached the transmitter site in Germany, the 183kHz signal provided a good visual example of 'dawn-enhancement', with the signal showing a dramatic flare on the waterfall indicating its build-up in strength. 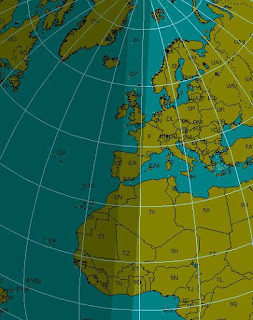 Once dawn arrived, it was interesting to see that the signal was able to hang-on for over an hour with reasonable strength before fading out rather quickly. Even though the transmitter site was in full daylight, the dark skies to the west were able to sustain propagation for some time before it all came crashing down.

Of late, the pre-dawn hours here have also been providing some exceptionally strong signals from Asia on the BCB. These are often enhanced at sunrise as well, as the strength often takes a short fast peak, before fading out for the day.

This was heard on the Perseus SDR and inverted-L antenna. The LF polar signals shown above, were recorded with the 10' X 20' loop and Wellbrook preamp while looping towards Europe at 030 degrees.

With the DST going positive, hopefully these good conditions will continue to build over the next few weeks. October is often one of the best months of the year for LF/MF DX.