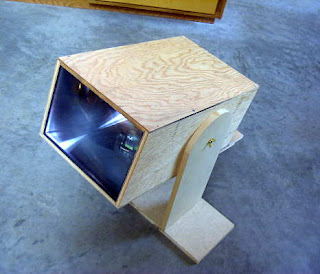 On Tuesday, I completed the plywood enclosure for the new portable lightwave receiver and mounted the optics and the electronics. My plan is to use this here on the island for some clear-air scatter / cloudbounce tests, once suitable listening locations are determined.

As with my main system, I used a homebrew mount capable of movement in three directions. 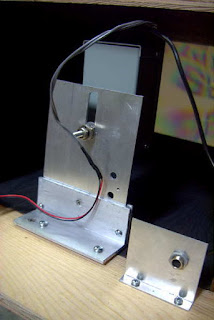 The photodiode needs to be mounted precisely at the focal point of the fresnel lens, and all three directions need to be juggled for correct alignment. Shown below is the setup used on the shop floor for alignment. The signal source is a 1W red LED about ten feet away. 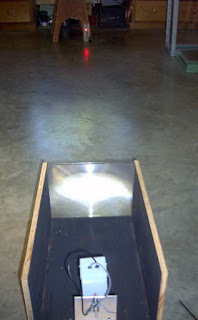 I covered the photodiode with a small piece of paper which made it a lot easier to find the point of sharpest focus. Once this had been found, everything was tightened and, hopefully, locked into position. 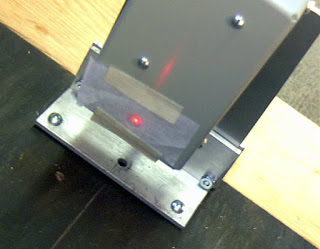 I then constructed a simple mount which allows the receiver to be tilted in altitude so it can be set to point at the desired region of sky. Once this was done, there was nothing else I could do but wait for darkness, so that the receiver could be tested. 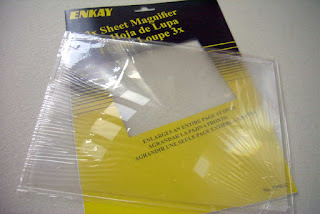 The fresnel lens used was purchased locally for just $5, so I had my suspicions regarding its optical quality. As well, it is 20% smaller than the bigger lens used in the main lightwave system. The bigger lens is 650 sq.cm compared to the inexpensive 'page-reader' lens of 530 sq.cm. The 2mm thick rigid plastic lens is an 'Enkay 2950-C'. The larger lens has a focal length of 20cm while the page reader has a focal length of 45cm. This gives them 'f' numbers of .78 and 1.6 respectively.

Much to my delight, the new lens / receiver appeared to work just as well as the bigger more expensive fresnel. As I swept the receiver across the far coast, I heard about twenty different signal sources. As usual, the strobe lights on aircraft were plentiful and very loud as planes lined up to the far north to land on runway 08 at Vancouver International. These signals were about 55km away. Several planes were followed as the climbed out into the clouds further to the east over Surrey. As I lost them visually in the clouds, the strobe signals were still quite strong in the receiver. Several signals were heard coming from Washington state, including a particularly strong 'growler', repeating about every two seconds, coming from Cherry Point south of Bellingham, about 80km away. There were many signals that had no apparent visual source (to my eyes) but were easily heard in the receiver. It appears that the $5 lens is a real bargain and should work well for my scatter tests. It seemed also, that the smaller lens, having a higher 'f' number, has a narrower field of view as aiming was a little sharper than with the bigger lens.

To hear similar signals, recorded on my first receiver, go to the links at the bottom of this blog from 2014/08.

The next task will be to determine suitable listening locations here on the island. Unfortunately, the island is dominated with two high (600'+) peaks, one right behind me to the south, which will make it challenging to get a signal from one side to the other. Hopefully I can find a clear spot somewhere that will allow me to shoot a signal over the top ... and of course, the fall weather must co-operate.