Hunting For NDBs In CLE244 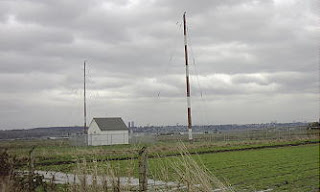 A nice challenge in this one is to hear VR - 266 kHz. 'VR' is the outer marker for the '26s' at Vancouver International (CYVR) and is located in Richmond, BC.

'VR' runs 50W into a closed triangular loop but is well-heard throughout North America having been reported as far as North Carolina to the east and Hawaii to the west.. Listen for its upper-sideband CW identifier (with your receiver in the CW mode) on 266.404 kHz.

At this time of the season, summer lightning storms may provide additional listening challenges but maybe we will get lucky. Propagation can often be as good as mid-winter if the lightning cooperates.

Our end-of-May Coordinated Listening Event will soon be here.
It will be a hunt for normal NDBs in two contrasting frequency ranges.
As always, first-time CLE logs will be extra welcome.

These are interesting frequencies for most of us, with some quiet
wide-open spaces.  We last used them for CLE228 in January 2018.

Most of us should be able to hear some NDBs in both ranges, though
Europe only has a handful in the '260s'.  From 440 kHz onwards, North
America has a few, mostly around 510-530 kHz, but listeners in Eastern
Europe have a BONANZA – probably over 400 active NDBs in Russia
(RUS + RSE) alone, though for most of us in Western Europe many of
them are hiding among Europe's Medium Wave Broadcast Stations.

*(There used to be amateur beacons using CW on frequencies mainly
around 474 - 478 kHz.  Over the years they have been moving to use
other frequencies and modes. Last time we only heard three and only
in Europe.  So we’ll no longer be listening for Amateur signals in this
CLE's frequency range)

Please send your CLE log to NDB List, if possible as a plain text email
and not in an attachment, with 'CLE244 FINAL' at the start of its title.

Those main items can be in any order within themselves, but BEFORE any
other optional details (Location, Distance, etc.) later in the same line.

As always, give details in your log of your own location and the receiver,
aerial(s), etc. that you were using.
If you send any interim logs, be sure to send a FINAL (complete) one.

You can find anything else to help you, including CLE seeklists for your
part of the World, from the CLE page, http://www.ndblist.info/cle.htm

Please look out for extra information in the Final Details in a few days
with advice about log-making, etc.


(Reminder:  You could use any one remote receiver for your loggings,
stating its location and owner - with their permission if required.
A remote listener may NOT also use another receiver, whether local
or remote, to obtain further loggings for the same CLE).

How Low Can They Go!


For the past few years several amateurs in Europe and along the east coast of North America have been experimenting on the ‘dreamers band’, 8.7 - 9.1 kHz.


Some rather surprising distances have been covered on these frequencies in spite of the dreadfully poor efficiencies realized with backyard antenna systems.

Previous 'earth-mode' backyard experiments on VLF by Roger, G3XBM, are well documented on his website along with details on his simple homebrew gear used to send signals across town using the earth. Following Roger's steady progression via his previous blog spots makes for fascinating reading ... there is some really great stuff here making it difficult to not jump in and take the plunge yourself.

This experimental field presents the ideal opportunity for a couple (or several) local amateurs to work together at exchanging signals on these low frequencies with simple home built equipment.

A major contributor to the present state of the ‘VLF / ULF amateur art’ is Stefan, DK7FC and a posting this week to the old RSGB's (blacksheep) LF reflector makes some of his earlier work pale by comparison as he announced the reception of his 270Hz signal (the 1110km band!) at a distance of  177 km!

On Sunday morning, 2019-05-12_10:34,+150m, I've done a carrier transmission on my ground loop antenna again. I did not expect more than, hopefully, a detectable spectrum peak in 57.6 km distance, i.e. at my tree site. The tree receiver site was listening and recording data using vlf-rx tools.
One E field antenna and two orthogonal loops were listening. The loops have been improved recently! They consist out of a single circular turn of 1.2 m diameter using 10mm diameter copper tube (about 25 mm^2). It is a closed loop, non-resonated, with an impedance matching transformer. This transformer previously had 1:100 turns. Now it (they) has 2:240 turns, i.e. two turns primary (out of 14mm^2, AWG6). This improved the sensitivity below 2 kHz significantly ( abt. 4...5 dB).
Furthermore the TX antenna length and angle has been improved, resulting in about +3 dB more signal strength on the RX site!

In a previous experiment at 270.1 Hz, some month ago, there was no result at all, not the weakest trace, despite excessive tweaking of all parameters. So the question was, will the improvements result in a detectable signal now?

Several things went wrong in that experiment. I forgot a bag containing important equipment such as the power supply for the netbook that generates the carrier signal. Also the output power was not as high as planned, just about 380 W, giving 2.2 A antenna current (I measured 64.7 V at 1 A DC). Anyway i managed to improvise so the experiment was started, but with some hours of delay which meant i higher QRN background level. Then, on the WLAN link to the tree, there were several interruptions of the stream (i'll move to 5 GHz very soon!). I even got some QRM from my battery charger for some short time periods (forgot to disable the charger remotely). So there were several factors that could have been improved or avoided. And the middle of May is not the ideal time anyway.

Well, 270.1 Hz, that's the 1110 km band! The far field begins at 177 km distance, i.e. i am clearly in the near field here. Thus, from a 'magnetic' TX antenna, we would expect that the signal is mainly detectable on the H field, i.e. the loop antennas.
The first interesting results is that this expectation is actually confirmed. There is nothing detectable on the E field but the carrier S/N in the H fields is close to 10 dB in the first run. Mixing the H fields and tweaking the filters rises the carrier S/N to 10.7 dB, see attachment.

So far not really an undoubtedly detection but it is a candidate for optimism! With a few less problems during the experiment there is a chance for 14 dB SNR. Also, there is quite much sideband QRM around 300 Hz which makes 270 Hz a bit harder to work on.

I see that the ARRL has filed three more formal complaints to the FCC concerning the bone-crushing HF emissions being produced by off-the-shelf grow light ballasts. The complaint also includes detailed lab data collected on all three devices and it is not pretty. One wonders why it is necessary at all that the ARRL be the industry watchdog instead of the FCC ... why aren't they being more diligent in filtering out these products before they hit the market? If importers and dealers are simply bypassing regulations for the sake of a quick-buck, then heavy fines must be imposed until someone 'gets the message'.

Some of the test products were ordered and purchased through Amazon and through Sears ... the ARRL's thorough report makes it obvious that rules are being ignored and amateurs are paying the price.

“The level of conducted emissions from [these devices] is so high that, as a practical matter, one RF ballast operated in a residential environment would create preclusive interference to Amateur radio HF communications throughout entire neighborhoods,” ARRL General Counsel Chris Imlay, W3KD, wrote in each complaint. The devices exceeded conducted emission limits under all test conditions, “sometimes by extreme margins, throughout most of the HF range ...”


In a similar vein as its recent complaint about marketing of certain RF lighting devices by The Home Depot, the ARRL pointed out that there were no FCC labels on two of the devices mentioned nor any FCC compliance information “anywhere in the documentation, or in or on the box, or on the device itself,” in violation of FCC Part 18 rules.

The League asked the FCC to require removal of all such illegal “grow light” devices from retail sale and marketing and the recall of those devices already sold or available for retail sale, and it said the device importers should be subject to a forfeiture proceeding.

With the proliferation of both legal and illegal 'hydroponic' operations, this kind of QRN is probably just the tip of the iceberg. It's good to see the ARRL slowly pounding away at the rule-breakers on behalf of American amateurs.

I see these same devices being sold on E-Bay, where presumably, they could be purchased worldwide and installed anywhere. As well, several of the U.S. online dealers state "We ship to Canada" ... just great.

Hopefully Industry Canada and RAC are gearing-up for the fight.
at 21:35 No comments: