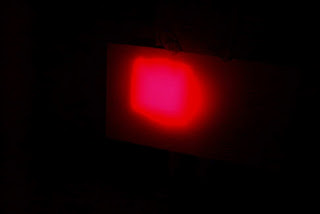 Over the past few days I've been trying to figure out some possible pathways that might be covered when transmitting from home.

The only real directions that I can go any distances are towards the southwest and to the southeast because of two large hills (500' and 900') to the south.


The challenge will be to put a signal over this 500' hill, about 1.5 km to the south ... I'll need to go around it on either side or over the top. Going around it at its edges will allow me to keep the light beam on a fairly low angle.

The main obstacle is my lot ... it is heavily treed in these directions and aiming would have to be too high of an angle to get over the trees. I do however, have one small gap between the trees which has turned out to be close to the right bearing (220 degrees) for the southwest test. For this, I can set the transmitter on my back sundeck and shoot through the gap without bothering anyone. For the southeast shot, or one over the top,of the hill, I'll need to move the transmitter two lots to the east of me, and use the neighbour's clear view of the hill. 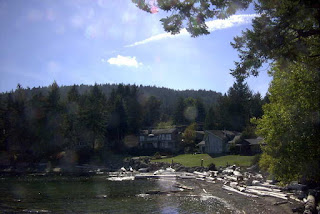 This should work out OK, as the neighbour spends the winter in Boston and the house is vacant ... but the outside power sockets are alive. This path though, has me shooting across a small bay and above several houses. Most are summer residents only but there are a couple that are permanent. I'll need to contact them and give them a 'heads-up' before I run any tests, so they don't call the RCMP!

The June 2014 edition of Radcom has an inspiring article by G3XBM, "Over The Horizon At 481THz", where Roger describes his early clear air scatter tests and excellent results over an 8.5 km path. This is a very impressive distance considering the small LED transmitter and 4" magnifying-glass lenses used.

Unfortunately, the distances here, on both paths, are not very much ... about 5 km. I'm  fairly limited to how far I can go here on the island. I'd be very happy to cover this comparatively short distance and a lot will depend on being able to keep a low enough angle and still get over the hill.

With the right weather, I may start as one reader has suggested, with a short almost vertical incidence shot and set up a few blocks away to test out the system.
at 10:56