A recent posting on the Yahoo ndblist Group page, by veteran LF/MW DXer and front-end guru, Steve Ratzlaff (AA7U) in Oregon, described his thoughts on LF/MW antennas and his experience with phasers:


Some years back at the other place, I experimented with phasers, trying
all the various ones I could find or build. I had a long term loan of
the DXE NCC phaser as well. I compared them mostly at MW where a phaser is generally most useful; but also at LF and HF. In all cases and all
frequencies, without exception, the Dallas Lankford "MW Phaser #2" was
significantly better. I have placed that article in the ndblist Files,
under "Aerials and Technical Files" section should you have an interest
in looking at that article. 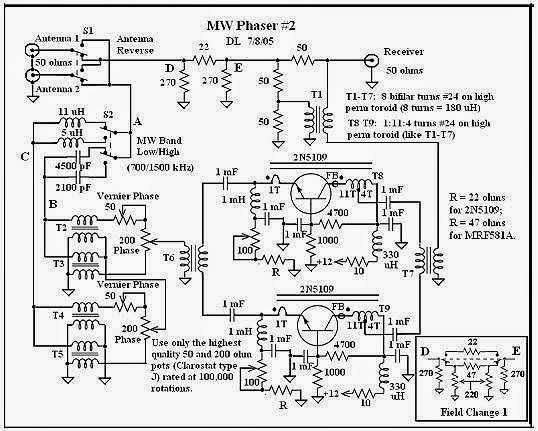 For LF use I never found any reason to use a phaser for trying to
optimize the level of a signal. Usually LF signals are short-lived and
often you only have a short time to catch an ident before it fades away.
You can easily waste 30 seconds or more just trying to optimize the
phaser; by that time the signal is usually gone. For those with a local
noise problem from a single general direction a phaser could be useful
in nulling out that noise, though of course you would lose the signals
from that direction too.

I also had room for antenna experiments, being able to compare them with
my longwire antennas. For those with the room, I believe it's hard to
beat an elevated longwire of approx. 400 feet or longer. I was very
fortunate to be able to string two E/W 1600 foot longwires, on either
side of the property about 400 feet apart and roughly parallel; and a
much shorter 400 foot N/S longwire. But even the N/S short one enabled
me to log a number of Greenland beacons (of course this was back when LF
conditions were still excellent, not like now).

Some folks have good results with the K9AY type antenna--Doug in TX has
good results using that antenna. But it's a ground-dependent antenna and
many areas don't have ground characteristics that support such antennas.
My area was one of those--the K9AY never worked very well for me. But an
elevated vertical loop worked very well, using the Wellbrook ALA100
preamp.

I had several rectangular loops up at one time, 120-150 foot
circumference using the ALA100, about 10 vertical feet distance between
the top and bottom wires to give a good capture area. These were very
sensitive at LF and a couple of times I was able to (barely) hear
distant South Pacific beacons that I was also hearing on the 1600 E/W
longwire. And of course the loop antenna is ground-independent so can be
used anywhere. It's bidirectional so can help in nulling noise too. And
such a loop doesn't take up much room as long as you can get it away
from local AC noise (which is true for all LF antennas, especially for
active whips).

Mark Connelly is a prominent east coast MW DXer and has a lot of info on
antennas and phasing on his webpage here.  All his applications are primarily for MW DXing but the principles apply equally
well to LF.

The Dallas Lankford phaser article described by Steve, can also be downloaded from here.

LNV phaser, John Bellini in Colorado, also chimed-in with some additional thoughts based upon his own experience:


You do (ideally) need to have good antenna separation to have good/easy phasing of the two signals but you do not have to have two different antennas. If the antennas are too close, the noise fields can be too similar and you won't get good noise cancellation or if the antennas are too close the wavelengths of the signals compared to the antenna separation will be long and it will be a challenge to phase out a signal.

I have been using three, nearly identical, LNV antennas separated 85-110 ft, depending on which pair I use, and have had very good results using the Quantum Phaser.

A very informative discussion of backyard antennas (and phasers) suitable for LW/MWwork is described by Graham Maynard in this Medium Wave Circle article. In the author's own description:

Well, once again I say "That's it". This time my mind churning effort has been to understand and develop the results possible with simple, small back-garden, mixed loop-vertical antenna systems. It really is not as complicated as might first appear, and those willing to try could enjoy as I do, listening to other people's locals ··· Ontario ·· New York ···
These pages have been long in writing - they summarise many years of enquiring study and thoughtful co-ordination with determined and diligent empiric effort...

There's enough good bedtime reading for an evening or two here!
at 07:00

Excellent discussion & digest of current research into phasers, wire antennas & loops for MW & LW use. I too can recommend both Mark & Graham's websites for those of us immersed in these topics. Effective use of my own Quantum phaser is only hampered by my lacking of some decent wire antennas to chose from with only 1 current wire antenna close to the ground & quite short in length. Nonetheless, I've had some remarkable loggings not possible without the ability to phase against my Quantum QX pro loop. I have discovered however, that even with subtle differences observing propagation condx on a determined freq. over a period of evenings, that the phase won't always consistently perform the same. I think once I can get a vertical wire antenna of some sort, this may improve significantly