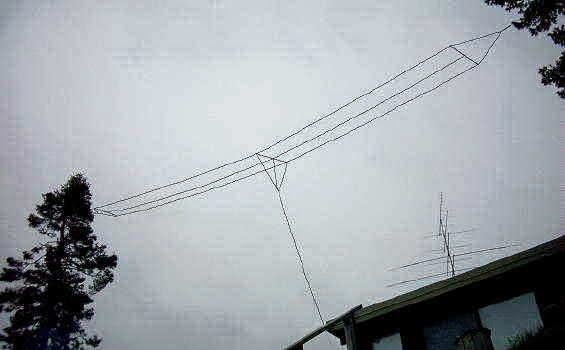 Saturday evening's crossband operation was a fun time. Conditions were reasonably undisturbed and some things were learned about the potential of our 'new band'. I really do hope that US amateurs can gain access to the band soon as there appears to be much interest in this part of the spectrum by hams south of the border.

Operating at the specified top-of-the-hour time slots only, proved to be a good way to go as it relieved the boredom of calling CQ for hours at a time while providing a wide variance in propagation conditions throughout the evening.

0704z NO3M calls me on 80m to report my signal now solid 559 and we have a few exchanges. Eric is really burning the midnight-oil for this one and much appreciated.

One thing that was learned, and will be of interest to small backyard suburban locations, is that low 'cloudwarming' antennas will produce good strong signals both locally and on first-hop skywave stations. John's antenna system is both lower and smaller than my own and nowhere near the ocean. My antenna is probably about twice the height of John's and parallels the beach, almost suspended over the ocean and at an effective height of around 70' ... probably even more at low-tide ... yet, two stations (one in Washington) and one in Arizona, both reported John's signal slightly stronger than my own. Power-wise, I run a bit more output power as well. This bodes well for those who might be thinking that their low and short 630m antennas will not be effective radiators ... It seems that our new band is very forgiving and that not all of the RF is being used to cook earthworms after all!

My thanks go to all of those amateurs that took the time to work us, as well as those that sent SWL reports (received from WA, AZ, IL and CA) ... without your interest, there would be no event.

With two more VE7 stations now on the band (VE7CNF and VA7MM), it is great to see the interest building. It will soon be possible to call CQ and actually have another station respond, on 630m!

Hopefully, one more crossband evening can be had before the winter conditions vanish and maybe, by next season, there will be more VE stations on the other side of the Rockies to talk to!
at 06:00