When I was in my 30's (30+ years ago), my very good friend Tommy (VE7BLF), reported to me a series of LDEs that he had heard on 160m CW. At first I was skeptical as the claimed LDE was heard 30 minutes after his CQ.

Tommy happened upon the LDE when tuning around the band one December evening. He heard a weak, warbly ... "CQ CQ CQ de VE7BLF VE7BLF K". A chill went up his spine as he had actually called CQ about 30 minutes earlier, and was answered by a K7. Sure enough, the phantom LDE soon came back to the K7 while Tommy listened to himself send the report, name and his QTH information on the next transmission! Listening to his own signals, 30 minutes later, really shook my friend up as he had no idea what to make of the incident.

Over the next few weeks, Tommy heard several LDEs, some with separations as much as 3 or 4 days and during this time made several recordings of the events. He made a copy of the recordings for me to listen to and the sound of the signal really did send shivers up my back. It was tormented, warbly, with a bit of flutter and very weak. It sounded as though the signal had been ripped apart on a trip to hell and back, adding further to the mystery.

The LDEs stopped as quickly as they had begun and were never heard again but in the meantime, Tommy and I speculated on what might be the cause. Were they genuine LDEs? ... they certainly sounded as if they had been on a very long trip ... or was the explanation something far less sinister? We never did solve the mystery but I had suggested that one likely explanation might be a faulty (or normally operating) VCR, somewhere in the neighborhood. Someone that happened to record at around the same time that Tommy was operating and playing the program back when Tommy happened to be listening. It seemed a far-shot and one that we never tested, preferring to think of it as another one of the mysteries of radio. Unfortunately Tommy became an SK several years ago, never knowing the cause of his mystery signals.

During a recent discussion with Tony (VE7CNF) and Mark (VA7MM) about the newly imaged plasma tubes, the subject of their possible link to LDEs also emerged. I related the above story and Toby immediately went to work with his old VCR! In his own words:

Yes, old VHS recorders could cause long delay echoes. When Steve mentioned it, I had to try it. I attached a photo and some recordings.

I hooked up my old VHS recorder with BNC video and audio cables in and out. I pulled out the video cables a bit to disconnect the shields, so RF could leak into and out of the video ports. My IC7410 was connected to a dummy load and split, through a T connector, to a whip antenna on top of the VHS.Transmit power was 100W to the dummy load.

I transmitted while recording video. When I played it back I could hear the CW signal pretty much on frequency. I tried this at 1820 kHz and the signal had a lot of frequency flutter. At 3510 kHz the playback signal was stable enough for SSB.

So, RF leaking into and out of the video cables of a nearby VHS recorder could explain LDE's where the delay is hours or days. 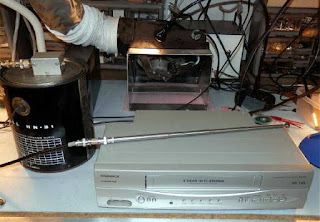 Mystery solved ... the signals that Toby reproduced had the exact same characteristics as I recall from Tommy's old tape recordings although his signals were much weaker, making them seem as if they had been on a very long journey.
I wonder how many others have run into this same situation over the years?

Since getting on the air as a teenager in 1963, and thousand of hours of operating,  I have never heard an LDE, or at least nothing longer than a keying echo on a longpath reflection. How about you?

Re Long delayed echos and short delayed echos. I had a similar experience to Tommy's. These occurred during the last sunspot minimum when 80 and 160m propagation was very good.


When listening to a RTTY net on 80m (3598) Sept 13th 2007 at 0300-0343z. A interfering RTTY signal 85 hertz
low slowly increased in strength to make rough copy of the stations presently transmitting. To my surprise it was signing my callsign and sending data that I had sent one week before on the same frequency and time (Sept 7 2007 0300-0343z) It faded in and out several times and then was
gone after about twenty minutes. All the time it's frequency was rock solid at 85 hertz low.


Asking the others on frequency if they had heard this signal, all replied no they did not hear it.
So then I suspected some local radio enthusiast was just fooling around.

He always used QSK and remarked how he was hearing a short echo from his own transmissions. When I switched to QSK I could also hear a 200 to 400 millisecond echo at the end of each key press. The other odd thing
was that we could each hear our own echos, but neither of us could detect a echo on each other.

The only other time I have heard echos that were probably around the world
was during my career as a radio operator working ships that were out near the dateline on 12 MHz.
Our antennas at the coast station were not highly directive.

Very interesting John. Toby also tried the test on 80m and reported the signal was much better quality...'SSB' quality as he stated, so it seems likley that you experienced the same thing as Tommy. I've heard the QSK echos on myself, mainly on 20m at night..probably longpath or double longpath but very strong echos. Never heard anything like a second or two however but there's still time :-))