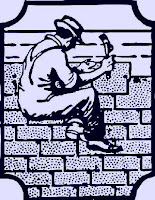 Work has begun on a new "summer project" (as well as re-shingling the woodshed and garden shed roofs) ... a 3-tube audiodyne receiver.

This one appeared in the January 1933 addition of QST (Rationalizing the Audiodyne by George Grammer) and then in subsequent Handbooks for a few years. It's the type of building I like to do, with lots of pre-planning before breaking out the tools, measuring all components carefully and refurbishing some of the 85+ year old parts.

This particular receiver has lots of metalworking involved as it uses two shielded compartments to keep the detector and RF stage from seeing each other. As well, it uses a set of ganged tuning capacitors to have the RF stage track the oscillator. The coils are wound to produce a lot of ham-band bandspread on the big drum dial... hot stuff in '33. 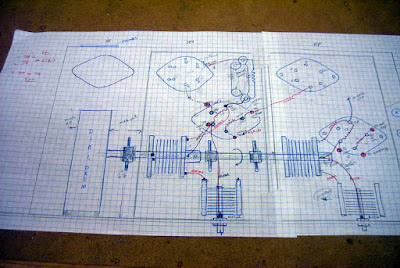 So far, I've completed all of the shielding and drilling of critical holes ... all measured three or four times before taking the plunge. The only chassis available (Hammond or Bud) is about 1/2" smaller in width and depth, making everything just a little snugger, but still maintaining proportions. 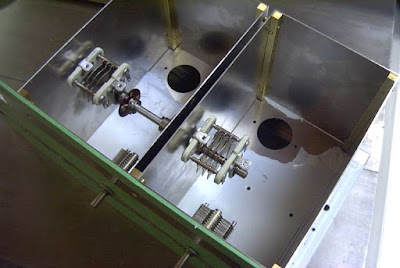 I have no idea how it will perform but so far it's been a fun project. If it works well, even better yet ... but handily, its given me a good excuse to avoid more important things, like the two roof projects!
at 06:30

Another fine looking project from the 7SL workbench.

Will you have coils for several bands, and
leave the top open to make coil changing easier?

Hi John ... just going to start with coils for 40m and see how it works before winding any more. I'll probably leave it without a lid for now. The tube lineup will be 78's in the RF and DET stages and a 76 in the audio ... all 6 volt filaments.