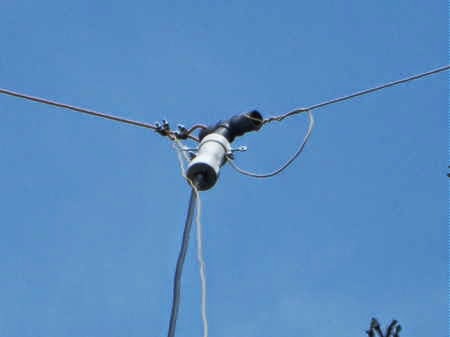 Mike, VE7SKA, AM/FM DXer from Saltspring Island, a nearby island here in the oceans of south-west BC, has sent me a description of his latest doings. Mike took advantage of the recent warm sunny weather to do some antenna work.

Mike calls his new antenna the SDSS (Super Drooper Sleuther Sloper)! It is 110' long, made of #18 wire and hangs from near the top of his 48' tower, drooping to a low sturdy Fir branch, about 10' high.

Using a section of Belden 9913 that was already on the tower (it used to feed his 6m array), Mike feeds the 'drooper' via a 9:1 balun / matching transformer... with the antenna feeding one leg of the transformer and the other side going to a section of #18 wire dropping straight down and terminated in a small ground system at the base of the tower. 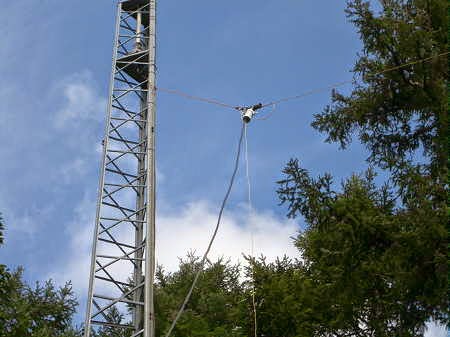 The antenna runs ESE at 112 degrees by WNW at 292 degrees ... the bread and butter direction from SW Canada. For phasing and comparison, Mike uses a much lower wire, 30' long x 7' above ground level, running SE at 140 degrees by 320 degrees NW.

Mike goes on to say that phasing the new antenna against its smaller and lower little cousin allowed him to log several of the stations noted above, although the lower antenna picks up more noise.

This is really the key to any antenna system and one of the reasons we were always taught to get antennas as high as possible ... to get away from those nasty noise sources in or near the house.

With several antennas to play with now, Mike is looking forward to some interesting work on both the BCB, the beacon band and the lower SW bands but plans to get the antenna up much higher in some of his tall Firs before too long. As well, a high Low Noise Vertical is also on the 'to build' list.

So far the SDSS is proving the old myth wrong ... that antennas put up in anything less than the foulest of weather just don't work.
at 10:44