Several QSL cards have arrived after the last 630m 'crossband' event ... including one from ZF1EJ in the Cayman Islands confirming our 630m QSO in January. 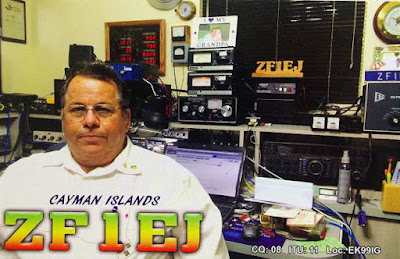 The contact was made on JT-9, the 'WSPR QSO' mode, and represents DXCC country #3 for me on 630m ... only 97 more to go! ZF1EJ was running just 32 watts output when we had our 630m JT-9 contact but has since cranked his output to around 60 watts. Eden is beaconing most nights on WSPR and puts out a well-heard signal. He is very interested in two-way JT-9 work with other VE stations as well as any Europeans and down-under stations.

From what I can tell, it looks like JT-9 (similar to JT-65 but a much narrower bandwidth of 15.6Hz) is establishing itself as the go-to mode for weak signal two-way work on 630m. It has a couple of things going for it that makes it very attractive for this band ... it can dig way down into the noise (-25 db approximately) and communicate with very weak signals and, it does not require amateurs to know CW, a growing trend with newer operators and a real hindrance to two-way CW work. I suspect, and hope, that there will be much more CW activity on 630m once amateurs in the U.S.A. get the band as the amount of information that can be exchanged per transmission on JT-9 is limited ... time will tell.

In the meantime, here is a request for more two-way 'crossband' CW activity with amateurs in all parts of North America. I have recently totally revised the 'CQ Crossband' page on my website, 'The VE7SL Radio Notebook'. Please note that my web address for well over a decade, is no longer valid and everything has been moved to this new location. If you have the old one bookmarked or are linking to it from your own site, please be aware that previous links will now be dead.

The crossband concept allows amateurs not yet on 630m to still participate in this exciting part of the spectrum ... and to check out their ability to hear anything on MF. If we were to make a schedule for a crossband contact, I would be transmitting on 630m at full ERP while you would be answering on one of the HF bands ... usually 160, 80 or 40m.

I am very much interested in setting up crossband schedules for 630m at any time and can very likely enlist several other VE7s to be there as well so that you can work more than one station. I have full details on my updated 'CQ Crossband' web page but please do not hesitate to give crossband a try! 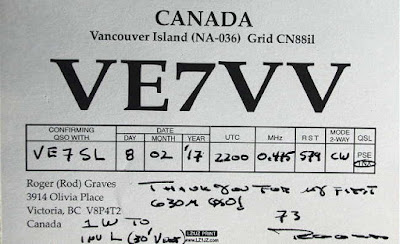 Roger, VE7VV in Victoria, B.C., recently became the 8th VE7 to muster RF on 630m, with power limited to 1 watt at present. Our contact was on CW while he worked stations in Vancouver on JT-9. Hopefully he will continue to build his station and become more active on the band.

Crossband continues to be a subject of much interest both here and with many U.S. stations that are waiting for the band. Recent cards from Colorado and California, shown below, are the latest to arrive. 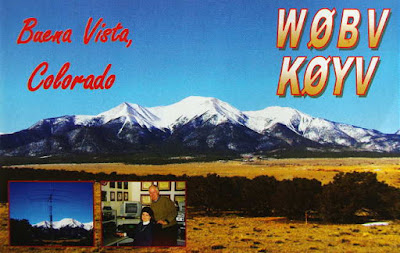 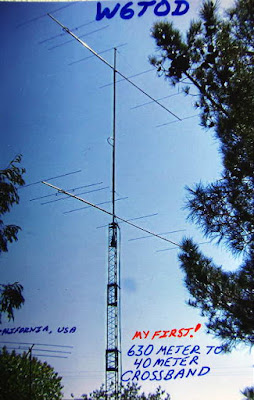 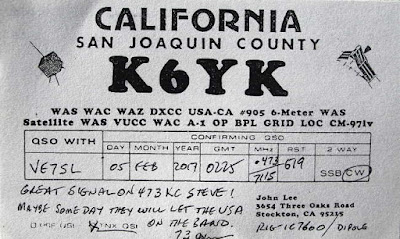 K6YK gave me an RST of '519' but explained the reason for this was because he was receiving on his 3 el HF tri-bander which provided the best signal-to-noise value! This is often the case on 630m so try what you have. Many times a 'non-resonant' antenna will pick up less noise and yield the best signal readability.