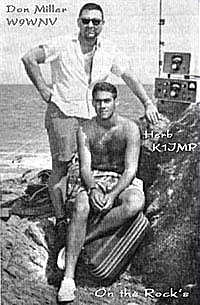 A mention in the KE9V weekly 'CALLING CQ' e-mail letter brought back more memories of my teen DX years. The article pointed to a YouTube interview of legendary DXer Dr. Don Miller, W9WNV, conducted by another DX legend, Martti Laine, OH2BH. The fascinating interview was conducted in December 2016 and is broken into five parts.

For those old enough to remember, Don spent a few years in the late 60's providing DXers with one rare country after another ... dozens of them. He was a superb operator and the originator of the now ubiquitous "5NN" shortened signal report, after trying unsuccessfully with "FNN". He was also one of the very first to operate 'split', requiring stations to call up or down instead of the then prevalent one frequency pileup! Don was really instrumental in shaping much of what we see today as 'standard ops' when it comes to DX'pedition operations. To hear Don handle a pileup was something else. Often when the pile became very large, he would listen to the calling crowd for a couple of minutes and then respond with a list of calls and signal reports ... nothing like the individual exchanges we see today. 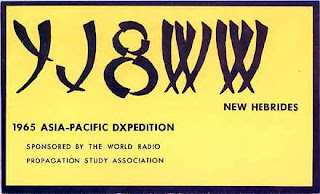 My little DX-20 and VF-1 were only able to work Don at one of his stops ... YJ8WW on 40m CW. He was all about giving the little guy, those running modest stations, an opportunity to work some rare countries.

All was not roses however. Don ran into several problems with the ARRL regarding some of his 'supposed' locations. Several of his operations were disqualified for lack of proper documentation, sworn affidavits from his DX companion that they weren't actually where they claimed to be and by his own admission. As well, there were certain stations at the top of the honor roll that, for whatever reason, Don was just 'unable to hear'. This infuriated many of the top DXers of the day as well as officiators of the DXCC program, still in its infancy. Don claims his selective deafness was because some of these amateurs were 'DX hogs', working him several times on the same band, a practice he discouraged. Others claim that it was because these top DXers did not contribute monetarily to his expeditions. I suspect the truth lies somewhere in between. With big egos and honor roll status involved, a lot of bad blood was spilled in the DX community at the time ... bitter memories to this day still, for some.

As bad as things had become for Don, it got much worse, when in 1980, rightly or wrongly, he was convicted of conspiring to have his estranged wife killed and was sentenced to 25 years to life.

Don Miller is one of those 'larger than life' personalities whose presentations at DX clubs and conventions would bring the large crowds to their feet with his DX stories and expedition accomplishments.

The YouTube interviews show a somewhat contrite, remorseful man, compared to the one we met in the 60's but there's still a hint of that young mischief-maker and a twinkle in his 80 year old eyes as he teases of putting another rare one on-the-air, one last time.

Don is now AE6IY and if you hear or work him, love him or hate him, be aware that you are talking to one of amateur radio's living icons.