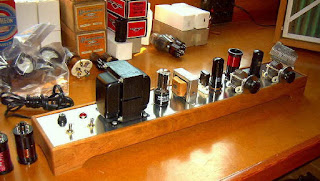 
Operating from the left coast and choosing to limit my output power to 5 watts, I really didn't expect to work more than a half dozen stations or so. The week-long event included two weekends, providing plenty of opportunity for participants to spark-up their novice-class rigs or their favorite pre-80's 'boatanchors' ... and they did!

I had 68 contacts with other 'NRR' stations, working numerous Heathkits, Drakes, Johnsons and homebrewed favorites ... even a Collins KWS-1! Staying true to the 'novice' class spirit, most were using hand keys and a surprising number were even using crystal control.

I decided to enter the fray with my homebrew "Longfeller", shown above, run at 5W to take advantage of the low power multiplier as well as using crystal control.

After struggling to work two stations, I soon decided that if I was going to work much at all, I would need to switch to 'search and pounce' mode and use the VFO. The once ubiquitous Heathkit VF-1, with all of its charming quirks, was pressed into service. Although I've always loved its green hypnotic dial, a week with the VF-1 reminded me of all the things I also hated about it as a teenaged ham back in the mid 60s'. But as it did back then, it served me well and allowed me to park the Longfeller wherever I wanted.

So much of the NRR reminded me of my early exciting radio days, high up in my attic bedroom shack. It reminded me of how challenging each contact was back then and of the pride of achievement when a contact was completed using pretty basic gear. It reminded me also, of just how far our equipment has evolved since then and gave me a renewed appreciation for the modern gear I unfortunately often take for granted.

For the low bands (80/40m), the Longfeller was fed into full-sized vertical wire groundplanes made from homebrew ladder line and both fed with the same coaxial feedline. 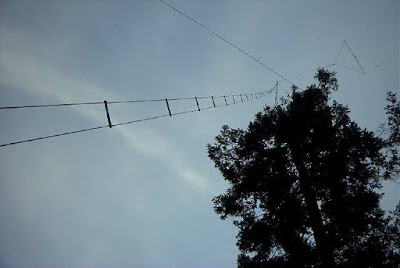 A counterpoise of eight wire radials were laid on the lawn temporarily with the feedpoint sitting about 20' from the ocean. Being right at the ocean allows me to take advantage of an approximate 6db of "sea gain", effectively turning my 5 watts into 20 watts of radiated power. At times, my signal needed all the help it could get. 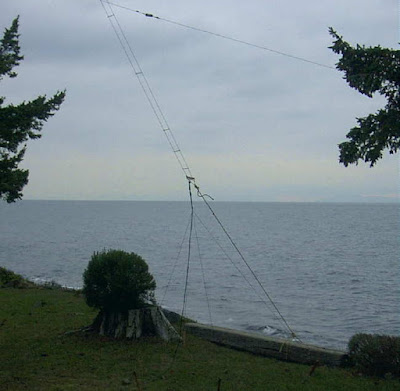 It was also exciting to catch the sometimes fleeting transcontinental openings on 15m, as the MUF often struggled to reach 21 MHz each morning. This very much reminded me of past solar cycle peak winters and the morning excitement of watching the MUF slowly climb towards 50MHz, or in some cases, shoot up like a rocket. As Cycle 24 reaches the bottom, the effects of low solar flux values on our higher bands becomes increasingly more evident. I suspect that there will be no 15m transcontinental work in next winter's NRR and who knows how long that might be the case. High MUFs were fun while they lasted ... another thing often taken for granted.

Without question, one of the most interesting parts of the nine day event was following the propagation variances from night to night on 40 and 80m. With a couple of exceptions, low-band propagation was generally pretty good, with one mid-week night being just great. Signals from the east coast to the southern states were strong and with almost no QSB. The Longfeller pushed its 80m signal to Florida, Maryland, New York, Alabama, Louisiana, Ohio and Kentucky. I remember many nights like this when operating 80m back in the early to mid 60's, during the lull between monster Cycle 19 and wimpy Cycle 20. Hopefully we will see more of these really nice transcontinental nights on 80 over the next several years.

For me however, the highlight of the event occurred last Saturday afternoon, while on 40m, fully ninety minutes before our local sunset. I had called WW6D after his 589 CQ only to hear him respond to another NRR local, Mark, CF7MM. He gave Mark's 50 watt DX-60 a '589' and when he finished I called him again ... with not even a whisper of response or even a QRZ. After I called him a third time, he returned to his CQ, leaving no doubt that he wasn't hearing a trace of my signal. Now full-sized 1/4 wave groundplanes mounted beside the ocean are not noted for producing high-angled radiation, which this path would certainly have benefited from, but I would have expected something!

I immediately moved down the band a few kilohertz and sent a short hand-keyed CQ and received an immediate response from WS1K in Plymouth, MA! Jon's signal was a solid and unwavering 559 and he was running only 5 watts as well ... and, he was crystal-controlled! The groundplane had swiftly redeemed itself as this exciting contact went into the log on 40m ... and all in broad daylight! Pictured below is Jon's transcon ether-busting machine ... proof that form does indeed follow function!

For me, there is only one other operating event that is as enjoyable as I found the NRR to be ... the annual 1929 BK Party, when signals are often just as strong as in the NRR, but a couple of decades raunchier-sounding. Both are great fun and if you loved the NRR you will love the '29 BK.

I'm really looking forward to next year's NRR but will definitely be running more power. I was impressed with the several Drake 2NT's that I heard and luckily enough, have one such rig in my boatanchor basement. It will be a good project to recap and put back on the air, along with the VF-1, which will also be given the once over to encourage it to behave properly when driving the classy Drake. 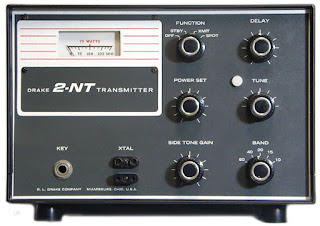 Please give the NRR some serious thought for next year ... it's not too early to start planning, refurbishing or to seek out and cherish that aging old beauty, presently hiding in someones attic gathering dust. See you in the NRR!
at 22:18


Might be the best "Ugly" rig out there Steve?
Cheers !
V

Yes ... it's definitely not pretty but a Collins would not have sounded any better!

Say, what's the wire wrapped around the final tube?

Hi Dan - the transmitter is a one tube (6V6) crystal oscillator. The second tube is just being used as a coil form to wind the tank coil around!