Your LF Station's Best Friend - The Scopematch PT. I

If you're planning to get on Canada's newest ham band (630m), or are in the U.S. A. and building for when that day arrives, then you'll probably be interested in today's chatter.

Several years ago, when I first set up my 2200m (136KHz) station under Industry Canada's Amateur Experimental Licensing Program, I utilized a fairly simple method shown in the LF Handbook, of attempting to tune and load my antenna. I had built a small top-loaded wire vertical consisting of a two-wire 50' flattop at the top end of a 30' vertical wire. A large loading coil of about 3 mH at the base of the antenna took care of getting the system close to resonance. As shown below, a variometer was used to fine-tune the system to resonance while the antenna impedance was matched to 50 ohms by tapping up from the base of the loading coil. 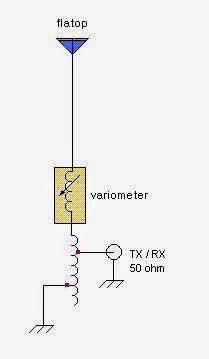 A 2A RF ammeter was used to monitor antenna current, with the plan being to tune and tap for maximum antenna current. It was the first time I had done any LF antenna work like this so it was a true 'learn as you go' project. It sounded fairly simple in theory but actual implementation was more challenging than I thought. What I also should have had was an LF SWR meter in the 50 ohm line as tuning and tapping for maximum antenna current did not guarantee that my system was indeed resonant or impedance matched. As you can imagine, there was much interaction between the two adjustments and I often found myself chasing my tail.

There were some tuning combinations that would peg the RF ammeter, indicating more current than my system was even capable of producing into a 50 ohm load. No doubt my settings were sufficiently 'off track' to create some diabolical impedance / off-resonance combination. I eventually settled on something that looked close but I was never really sure. Several weeks later I built the 'Scopematch' (designed by Jim Moritz -'MØBMU) and have not had a problem tuning and matching ever since.


Of all the devices in my LF toolbox, the most valuable by far is my Scopematch. Basically, it  is a coupling device that allows you to monitor the tuning parameters of your LF antenna system. In real time, you are able to see both the impedance condition and the resonance tuning condition by observing the antenna current and voltage waveforms on a dual-trace oscilloscope. It is immediately apparent if your system is impedance matched (or not) and how close to resonance the system is. It will even tell you if your antenna is capacitive and requires more inductance to lower the frequency or if it is inductive and requires less loading inductance to bring it up in frequency.

Besides the dual-trace scope, the Scopematch requires only three parts and is fairly non-frequency critical. I am able to use it on both 2200m and 600m without any changes. More details to follow.