After several weeks of reading, planning and homebrewing, both the transmitter and the receiver boxes were finally finished....at both ends of the path! 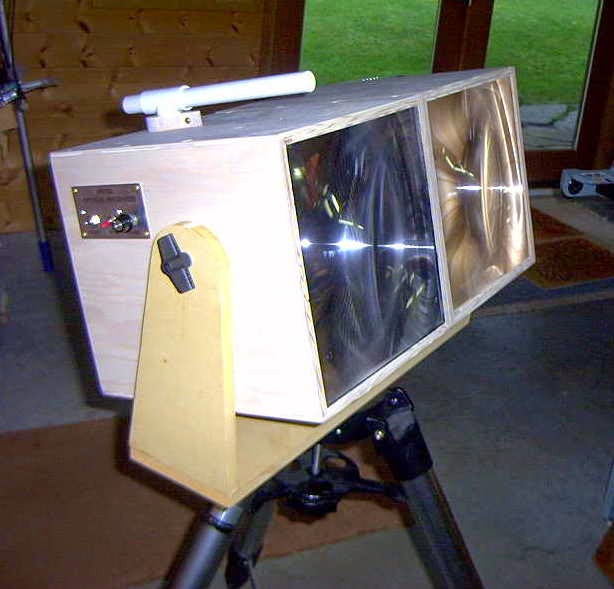 After the transmitter and the receiver had been accurately focused (the receiver's photodiode at the fresnel's focal point and the transmitter's secondary lens properly positioned) both enclosures were screwed together and mounted on a tripod. 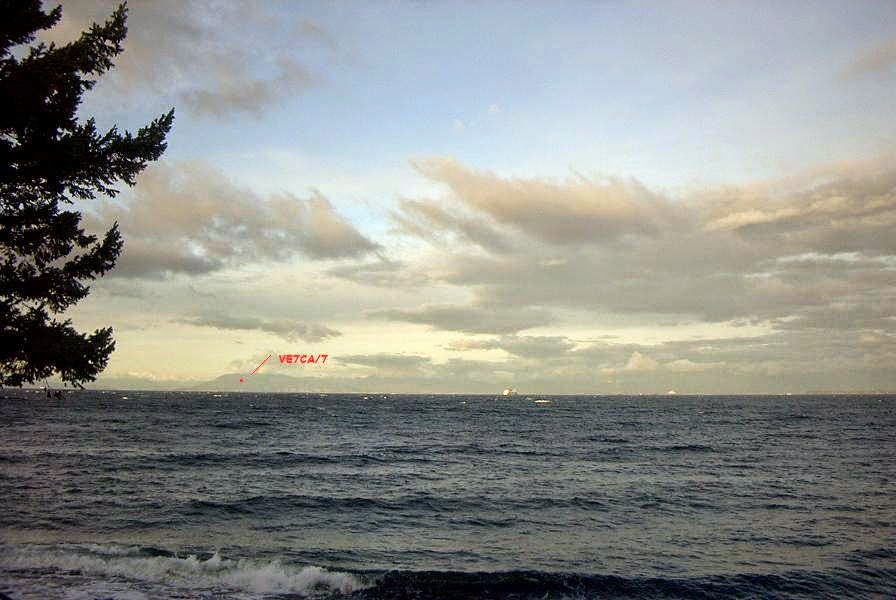 Markus, VE7CA, had checked-out a suitable location not far from his home QTH on the road to one of the local ski-hills. This gave him an unobstructed view to my location on Mayne Island, about 54km to the southwest. I had planned to set up in my front yard, about 15' above sea level and on the eastern shoreline with a direct shot to Markus.

Even though we were using LEDs rather than lasers, I still felt somewhat uneasy as our path crossed directly over the runways at Vancouver International (around the path midpoint) as well as the main ferry lane between Vancouver Island and the B.C. mainland. Considering the distances involved, I probably need not have worried as the light, although bright, would cause no physical harm other than possible momentary distraction or curiosity. If one of the ferries had been approaching the path, I had planned to shut down until it had passed as it would have been hard to convince authorities that the light really was not a laser, before they carted me away!

After waiting for the usual winter B.C. rain to subside, we finally had a promising evening shaping up, although somewhat cold. Markus, accompanied by Jim, VE7BKX, loaded his vehicle and headed for the mountains. With neither of us having 2m portable radios, we somewhat guiltily reverted to cellphones to announce setting-up status.

Shortly before dark, I aligned my light boxes to point at what I was pretty sure was Markus's location and turned on my FSK beacon.... the bearing was taken from Google Maps and alignment aided by my I-Pad's Commander Compass Lite app. The plan was for Markus to sweep until he (hopefully) heard me and then turn on his beacon so that we could then both tweak our final alignments.

Almost immediately I heard his beacon signal although there was no visible sign of his light.

Before final alignment I made a quick recording of his signal.

Neither if us had any real idea of what type of signal strength to expect and we were both very surprised to hear how strong the signals were. Once we had both aligned and our lights were now visible, we switched to CW mode and proceeded to work each other in typical QSO mode.

Hear is a recording of Markus sending my RST report.

Signal reports as well as grid squares were exchanged just to make everything 'official'. We then settled into a nice twenty-minute ragchew until the cold winter air took its toll on our fingers forcing us both to close down and pack up for the night.

Markus grabbed a short cellphone video from his end which shows the still fairly bright twilight skies and the LED signal source:


Earlier, John (VE7BDQ) had made the decision to not build a transmitter as he preferred not to go portable. Both of us were interested in pursuing a possible non-line-of-sight (NLOS) path by using either 'cloudbounce' or 'clear-air scattering' which would allow John to set up in his backyard. The path between us is much shorter than the VE7CA/7 path as can be seen in the map below:

To date we have made one test at this mode, trying various takeoff angles at my end, but cloud conditions were not optimal, and as yet, I am not totally certain of what type and height of cloud would be best. Perhaps we should be looking for the typical very light fog that often forms over Georgia Strait for enhanced water molecule scattering? As well, I think our best chances for success would be the slow speed QRSS mode, possibly QRSS3 or QRSS10 which could offer as much as 20db signal gain over normal speed CW.

For one-way beaconing, I plan to add a more accurate crystal-controlled tone module so that my CW signal's frequency is precisely known and can be watched for in the very narrow bandwidth window of Argo or Spectran over a given period of time. Even at these slower speeds, QSOs exchanging the minimum required information can still be made relatively quickly. Hopefully any reception at all of my signal at John's location will excite him into building a transmitter as well. Completing a two-way contact using the NLOS mode would be a very interesting challenge.

In the meantime, Markus and I have been seeking out possible new locations for his remote work, using "HeyWhat'sThat Path Profiler" web site. This site quickly indicates the distance and headings between any two points and draws a geographic contour of the path showing any obstructions.
﻿

Markus hopes to get out to one such favourable location in the Fraser Valley mountains, before the weather turns nasty once again.

If there is anyone in the Vancouver lower mainland region that might be interested in building a lightwave station to join us in the fun, please do not hesitate to make contact with any of us...we would love to hear from you! 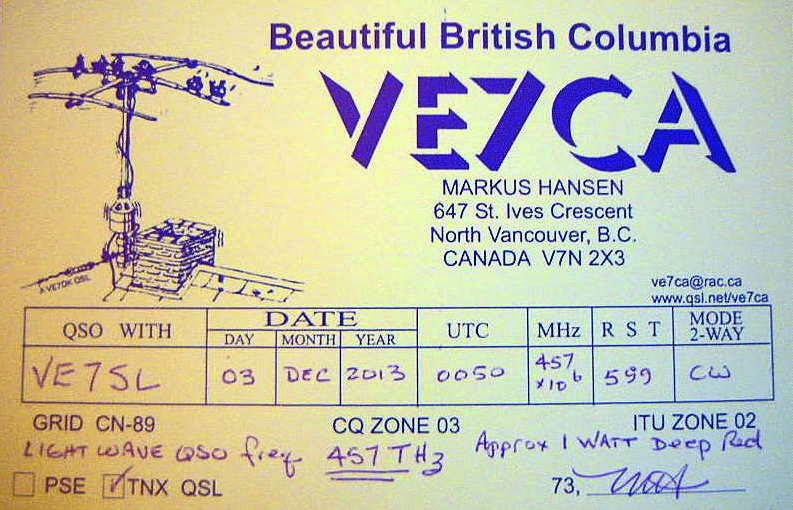 If you are a member of the Radio Amateur's of Canada (RAC) and receive their 'TCA' journal, please watch for our upcoming article in September's issue..."A West Coast Lightwave Project".
at 09:06

I followed your articcles with interest. True amateurradio spirit. A very interesting experiment. Thanks for sharing it with us. 73, Bas

Thank you Bas....I'm delighted that you have enjoyed it although it went on a little longer than I had planned! Hopefully the experimenatl operations are not over yet as there are still many new things I would like to try...IR, NLOS, voice modulation....

How about bouncing your signal off of a mountain or other feature that is visible to both of your locations, even if you don't have direct line of sight signal path?

Dave - that is something we have been considering! The problem is, anything that is 'common' to both of us, is at least 50km away. Maybe our best chance is to bounce light of a snowy peak somewhere over there but I suspect the path loss for our 1W lights may be too great.