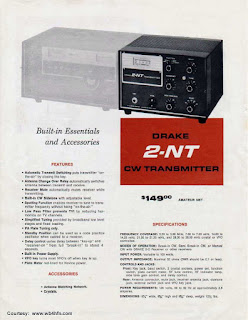 One of this summer's radio workbench projects was to refurbish my Drake 2NT transmitter for this winter's NRR event. The 2NT was introduced in 1966 with the 'novice' ticket-holder in mind, selling for $129. It was the first and only CW-only transmitter produced by R.L. Drake.


As novice transmitters go, the 2NT was a cut above some of the others out there, boasting interesting features such as a built-in antenna changeover relay, sidetone oscillator, grid-block keying and built-in low pass filter.


The tune-up procedure was simplified as well and with Drake's reputation for quality construction, the 2NT became a popular choice for Novices and Generals alike.

My own 2NT was purchased, along with the matching 2C receiver and speaker/Q-multiplier combo over 25 years ago at a Washington state ham fleamarket. Ever since then they have been patiently sitting on the shelf, trying to catch my attention.

The motivation and much-deserved attention finally arrived this year after enjoying last winter's NRR and hearing several great-sounding 2NT's on 80, 40 and 15m CW. I operated the week-long Roundup with my homebrew 'Longfeller' at 5W output, in order to qualify for the QRP category.

I have to admit, the Novice Rig Roundup, was one of the most enjoyable contests I have entered in many years! Hearing many rigs from the 50's and 60's sounding so good was just a bonus. It was particularly gratifying to be able to work the midweek daytime activity on 15m ... a luxury that we may not enjoy now for several years if most of the long term solar forecasts are correct.

I eventually ended up with 68 contacts, but at 5W, it was a challenge ... most of my many 'CQ NRR' offerings were unanswered, so it was mostly a 'search and pounce' operation. With this in mind, I soon decided that next time, I'll get the 2NT ready to go and hopefully, with a little more oomph, can attract some callers.


Rather than hunt down and purchase the individual replacement electrolytics, especially the multi-unit can capacitor which was impossible to source, I ordered the '2NT re-cap kit' from Hayseed Electronics. They supply replacement kits for several boatanchors and are able to make and stuff multi-section can capacitors to match the original size and specs ... and all at affordable prices.

After cleaning the chassis and all of the switches, re-tubing with new tubes and removing / replacing all of the electrolytics, the 2NT was ready to go. Using a crystal for excitation, the following results were obtained:

Keydown voltages averaged ~520V while plate current ranged from 170-200ma. All-in-all, right on target and not bad for a 51 year old transmitter!

The 6EA8 modified Pierce oscillator in the 2NT seems particularly 'crystal-friendly', as every old style FT-243 style crystal that I tried sounded great. Even the newer ones from AF4K using a modern HC-49 crystal slab mounted inside a vintage FT-243 holder sounded great and worked perfectly.


A couple of days later, I returned to the bench to take some blog photos of the rig delivering power into the wattmeter. When I turned the 'stby' switch to 'transmit', the plate current suddenly shot up (with no keying) and the meter on my Variac supply indicated over an amp being drawn by the power transformer ... all with zero output and no crystal plugged-in!

A look at the schematic diagram revealed that with the grid-block keying system, the final amplifier's cathode is always grounded and a low voltage negative bias applied to the grid keeps the plate current cut-off until being keyed ... with cut-off bias missing, plate current will soar, along with transformer primary current. I suspected that something had gone haywire with the bias supply. 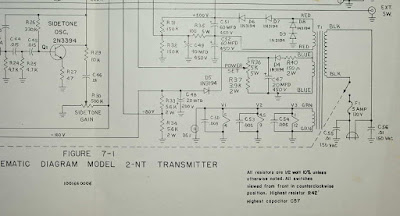 A quick check of the 2NT's printed circuit board containing the bias system components among others, indicated a discolored silicon rectifier (D5) in the bias supply. An in-circuit measurement revealed that it was indeed shorted, basically supplying raw AC across the filter capacitor and shorting out the transformer winding, quickly elevating the transformer's temperature in the bargain ... not good.

Although the diode only has to handle a small amount of current, it was mounted with a heat-producing 2W resistor straddling its top surface. As well, the phenolic circuit board was noticeably discoloured from the heat. I suspect this was the main reason that D5 eventually failed.

My 2NT was an early one, serial #670, so perhaps this parts-arrangement was re-engineered in later models. Once the diode was replaced with a much smaller modern one, of twice the rating, everything returned to normal. The last thing I would want to do at this stage is to burn out the transmitter's unique power transformer, undoubtedly impossible to replace nowadays.

The next bench project will be to refurbish and improve the stability of my Heathkit VF-1 VFO and to mate it with the 2NT.

There are several things that can be done to a stock VF-1 to improve its performance. Its wonderful backlit green dial will bring back a lot of memories from my teenage operating days with the VF-1 ... most, but not all of them, warm and fuzzy. 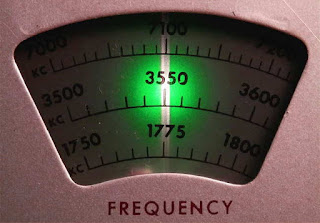 Another small quirk noticed on my 2NT is the meter mount. My early model has the meter mounted so low that the silk-screened 'PLATE CURRENT MA.' label is not clearly visible when looking straight-on.

Later models show that this was changed by moving the meter a little higher so that the label can be easily seen without having to look down inside. Nothing major, but something apparently missed during the initial panel design.

I'll have more to say about the 2018 NRR later, but if it's something that you may be interested in trying and you don't yet have a suitable novice-style rig, it's not too late to start looking, building or refurbishing.

You can read many interesting soapbox comments and see some nice NRR station photos from the previous two events here and here, but read with caution as you could easily get hooked. I find pages like this very inspiring and they remind me of the days when QST would publish photos, soapbox comments and exacting equipment descriptions used by each section winner in the annual November Sweepstakes contest.

NRR activity really skyrocketed last winter and I expect that it will be an even busier event next time. There are several CW contests that I'm looking forward to this winter and the NRR is right near the top of the list. I hope to see many of you in the 2018 NRR!
at 09:04

Thanks for the article! Very enjoyable. While I got my ticket around 1994, I've loved amateur radio since my very young years. I wish I still had some tube equipment!

Thanks Will...hey, it's not too late to find a nice old boatanchor transmitter for the next BK...still lots of time. Hope to see you then.

Steve, I'm determined to enjoy a QSO with VE7SL in the upcoming NRR! 40 or 15 should do it! More than likely I'll be using my own 2-NT, admittedly modified a bit beyond stock (cathode keying of driving and final, mainly, but also improved final neutralization). Will listen hard for VE7SL and maybe even let the Reverse Beacon Net tattle.

FB Dave and will also be looking for you! This year's event should be bigger and better than ever. I'm not hopeful about 15m though as last year it was very spotty. A nice solar flare during the week's event might help though.

I located a Drake2-NT to go with the Drake 2B. Can't wait to recap and put on the air. WX0E

WX0E Nice find! Pse let me know how much power yours puts out on 10m once recapped!