Well, just when the sun was showing some nice signs of growing quiet for the upcoming winter, Cycle 24 has once again demonstrated that it's not going down without a fight.

For the past few weeks of quiet solar conditions, low band propagation, in spite of the time of year, had been performing well, with both 40 and 80m having a nice level of evening CW activity stretching out to the central states and to the east coast.

That all changed this week when the Sun let loose with a series of powerful flares, one of which was the strongest in a decade ... all very surprising for a Sun that has already shown us many days of spotless conditions as it winds its way to the bottom of the cycle. 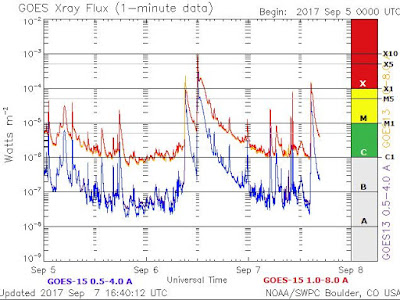 With Solar Cycle 24 being one of the weakest on record, it has shown levels of activity on the way down that could rival the past few much stronger cycles in their waning years. Another oddity for this cycle was its 'double-peak', not unusual per se except that 24's second peak was the stronger of the two.


With the recent flaring and accompanying radio blackouts, HF propagation has been poor and with auroral conditions forecast for the arriving CMEs, it may take some time to recover, especially on LF and MF. But it may not be all bad.

Disturbances like this will normally affect E-W, polar and Trans-Atlantic paths more than N-S paths. Oftentimes, paths to South America on MF and HF will be enhanced as will the Trans-Pacific path, so all is not lost.

There are many websites devoted to providing a 'heads-up' to what might be coming geomagnetically-speaking. Two of my favorites are here and here.

The more northerly you are, the more disruption you will notice and for some reason, VE7 land seems particularly in-tune with solar perturbations as the slightest hiccup on the Sun seems to immediately wreak havoc here. Even amateurs a hundred miles to the south or southeast, enjoy markedly less disruption than us out here on Canada's western edge ... for some reason, we seem more tied-in to the auroral zone activity than we should, given our westerly location. Perhaps the zone dips lower in this region than it does further east but it is something I have observed on LF and MF for decades now.

It seems as though the first hit has just arrived so hold on to your hats:

GEOMAGNETIC STORM WARNING: A CME has just hit Earth's magnetic field
(Sept. 7th at ~2300 UT). This is the debris from Wednesday's
decade-class X9 solar flare. It arrived earlier than expected,
confirming that the solar storm cloud is both fast and potent. The
CME appears to contain strong south-pointing magnetic fields that
typically do a good job of igniting geomagnetic storms. High-latitude
sky watchers should be alert for auroras in bright moonlight. Visit
Spaceweather.com for updates and more information about this developing event. 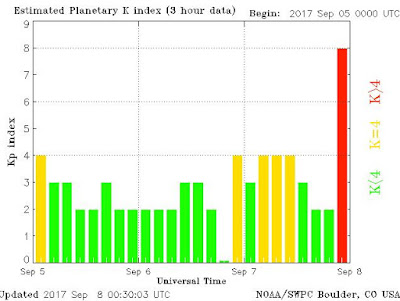 Hopefully the sun will outgrow its latest temper tantrum and get back to normal quickly so that this fall and winter will be one of the best for low band and MF work in the past decade ... with a quiet Sun, these frequencies can perform amazing magic at times.
at 18:01

Look like we just had a big X-ray event. X8 class, almost as bad as last week's 10-year flare. I was waiting my turn to work K4BAI with the bug during the WES sprint when it happened. He was a solid RST 579 when --Fwoop-- he faded out. Last thing I heard from him was "sri try again later".

The GOES X-ray flux had just jumped from baseline to 10^-3 (red plot on graph) in a couple minutes. 20m has gone dead and only VE7s are audible.

It's just crazy Dan...at this part of the slope down (almost bottom) this is surprising but then again, we can get monster flares at any time of the cycle. Hopefully the Sun will get it out of its system soon.