Both Mark and Toby have been refining their antenna systems with an eye towards the upcoming winter season as well as the November 'crossband' activity weekend ... both stations were heard testing this week and are sounding very strong at my Mayne Island location.

Toby has sent a picture of his antenna loading coil and variometer scheme, shown below. 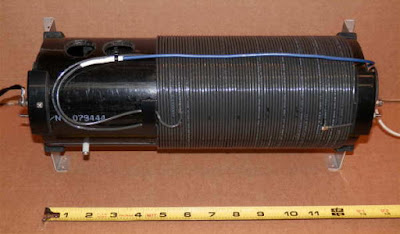 "You can see the white slider knob at the lower left, which goes through a slot in the outer pipe and screws into the end of the inner pipe. The white wire at the right goes to the matching transformer, and the black high-voltage wire at the left goes to the antenna. The coil is wound with #14 so it can handle some power. There are ventilation holes around the pipe and at the ends, but at 200W I did not notice any warming. A regular rotating variometer may have slightly lower losses, but it would be larger and I wanted to make my tuner box small so I can hide it near the trees." 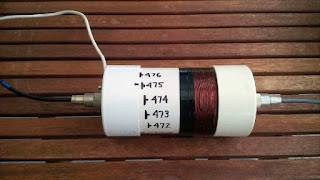 Mark also sent some pictures of his recent handiwork, showing the simple loading coil and tuning system presently in use at his station. His present plans call for something capable of handling power in the 100 watt range and, although using smaller gauge wire, the loading coil seems to handle it just fine. Like Toby, he is using a 'sliding variometer' and a toroidal autotransformer for impedance matching to 50 ohms. Mark will be running ~ 100 watts into a 100' vertical wire with top-loading. 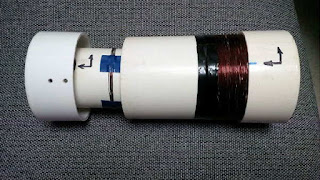 It is wonderful to see more new stations arriving on the band but the new activity seems to be coming from VE7 only ... how interesting it would be to have stations in VE6, the prairies and especially from Ontario, which has many more hams than any of the other provinces. The opportunities presented to Canadian amateurs by the new band are both boundless and challenging and there is so much that can be learned by 'jumping in'!

Another western amateur has caught the 630m bug, this one from the U.S.A. Steve, KK7UV, in Montana, has been busy building new antennas as well as a new GW3UEP transmitter. Operating with an experimental licence, WH2XNV, Steve has been putting a nice CW signal up this way during the evenings and is all set for the winter and, hopefully, for the fast-approaching day when the boys on the other side of the border get full access to 630m as a ham band. All of us up here very much look forward to working our U.S. counterparts very soon. 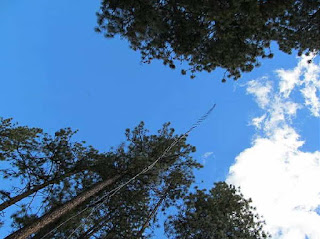 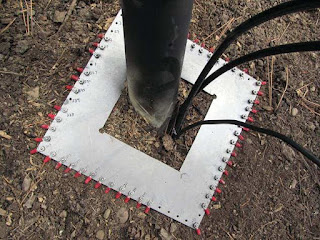 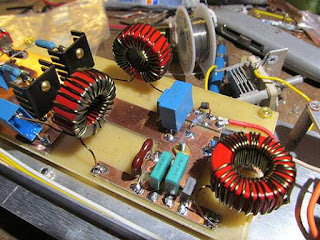 As well, he also went to a single-FET (per the original design) and garnered a further increase in efficiency, now at 86% and 82 watts out ... plenty of power to do some useful work on the band. It's wonderful to see how 630 meters brings out the 'experimenter' in all of us. He also reports that he's "having a bunch of fun at this ... "!

If homebrewing is your main interest, all of the 630m stations that I'm familiar with are using home-built transmitters. Maybe you like tinkering with antennas? This band is perfect for the design and development of small, yet effective, backyard antennas ... most will be surprised at how little is needed to radiate a usable signal on 630m. Perhaps propagation is your main interest? There is still much to be learned about the capabilities of our stations, operating at amateur radio power levels, in the MF band.

As mentioned before, we are really very fortunate here in Canada, to have this amazingly interesting part of the radio spectrum made available to us ... let's try and use it, from coast to coast and everywhere in between.