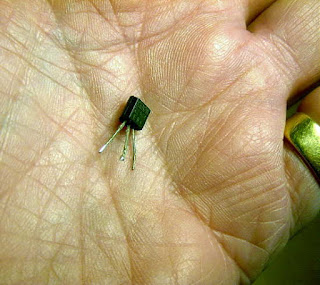 I was doing a little housekeeping in the shack this past week and ran across small piece of  anti-static foam with a transistor sticking out of it. It was the transistor from my Tuna Tin II final amplifier's stage ... the actual transistor that I had used to 'Work All States' on 7040KHz using my Tuna Tin back in 2000. Looking at it in my hand brought back a lot of wonderful memories from the fall of that year when I spent so much of my time looking for new states.

Like many others at the time, I was swept up in the second 'Tuna Tin revolution' when the NorCal QRP Club released a very inexpensive kit for the Tuna Tin II. It turned out to be the best $13 I had ever spent on ham radio bits as it brought me so much operating fun while making many new acquaintances in the process. 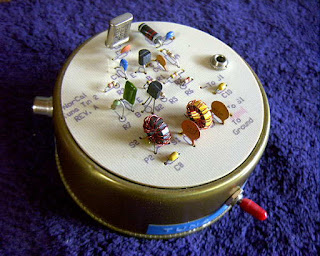 I recall the afternoon that I completed the kit ... attaching my antenna and calling 'CQ' on 7040 with a hand key plugged into the Tin. My afternoon call brought an immediate response from a station in Oregon who gave me a 579 report! Needless to say I was elated that it's ~360mw had done so well.

Over the next few days I worked a few more stations in the western states even stretching out to northern California and had pretty much decided that most of my QSO's with it would be fairly short range ... until the pre-dawn hours of August 6th when my hand-keyed 'CQ' was answered by NØTU (Steve), in Colorado! We had a nice solid ragchew until we ran out of darkness but the contact had given me re-newed optimism. If I could get a decent signal into Colorado, then perhaps I could actually work further afield ... maybe it was even possible to work all 50 states!

With that, I set myself a goal of trying to work them all. Although my 40m half-sloper was well matched and had proven to be a good performer in the 40m pileups, it only had four buried radials. The first thing I did was to bury another 30 radials around the base of the 48' tower, hoping to lower my ground losses as much as possible. With just one-third of a watt, there was no power to waste. 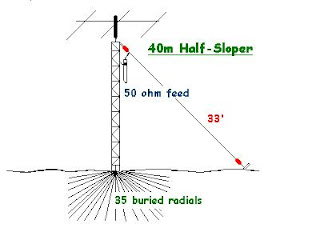 Back in those days, I was still working and could only get to the Mayne Island QTH on weekends. With the Friday night ferry arriving at around 8PM, by the time the woodstove had been fired-up and dinner taken care of, I very often didn't get to the Tuna Tin until around 11PM. As it turned out, the late hour operation worked out well and it didn't take long for my state total to climb. The toughest states were the New England '1's and as I neared the end, I still needed several. In late November, 40m revealed its magic-side and an early-evening 'CQ' brought replies from three W1's, all at once, each one a new state. Finally, in early December, I worked Wyoming for state number fifty!

The fifty QSL's were duly gathered and  sent to the ARRL for an official "WAS" award. Although there was no special endorsement for the Tuna Tin, other than for 'QRP', there was a nice note about it in the 'ARRL Letter' as well as in QST: 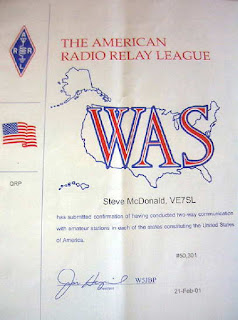 First Tuna Tin 2 WAS claimed: When the Tuna Tin 2 low-power transmitter article appeared in QST in 1976, its author Doug DeMaw, W1CER (later W1FB), envisioned it as a weekend project that could be used for short-range contacts.
Now, a quarter of a century later, a Canadian amateur has claimed the first Tuna Tin 2 Worked All States Award! Steve McDonald, VE7SL, got caught up in "Tuna Tin 2 Mania" and bought one of the popular TT2 kits. After working about 30 states with the little rig, WAS suddenly seemed plausible. McDonald realized his dream several months later when he turned in his cards for WAS. All contacts for the award had been completed while he was running about 400 mW from a Tuna Tin 2. As far as the ARRL awards folks know, this marked the first time WAS was achieved with a Tuna Tin 2--although there is no special endorsement for having done so. "Doug DeMaw knew in his heart that the rig would be useful and popular, but I don't think he ever envisioned that this little transmitter would still be working its QRP magic over 25 years after it first appeared in the pages of QST," said ARRL Lab Supervisor Ed Hare, W1RFI--himself a QRP and TT2 aficionado who has promoted the Tuna Tin 2 Revival and was McDonald's Connecticut contact for WAS. Congratulations to VE7SL on a tremendous operating accomplishment.--Ed Hare, W1RFI

Holding the battle-scarred 2N2222 in the palm of my hand reminded me of just how much excitement can be had with just a few simple parts and the magic of radio.
at 08:50

Steve you are persistent!. Wow I am amazed. I am a little surprised that you used a kit to build it though, HI. What is next? Markus VE7CA

Hi Markus....after buying and building the Tuna Tin, I built another from scratch for 20m...worked 46 states and 21 countries with it but haven't had it on the air for a few years now. The 3-section LPF is probably not even 'legal' nowadays....one day on 10m CW, I worked a JA as well as a PY on the Tuna Tin's second harmonic!!! It seems then that W.A.S. would be possible on 10m CW on the 2nd harmonic :-))

Nice post, thank you. I just bought a TT2 35th anniversary (used) and intend to light it up for Winter Field Day. Maybe I'll hear you on 40m! 73 John KC9TUI

Money well-spent John. I hope you have as much fun with your TT as I've had with mine over the years!