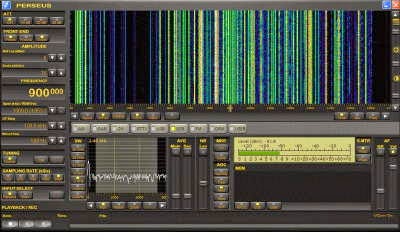 After viewing so many interesting YouTube videos of various Perseus DX catches, I realized that my present method, using just my I-pad, had to change.

I asked a few of the folks that had been posting high-quality captures, what method they were using, and learned a bit about "screen recording" software. These programs allow you to capture, in reasonable definition video, exactly what is appearing on your computer screen....in this case, the Perseus user interface.
I ran across several freeware offerings, all requiring downloading and installation but reviews of most showed problems ranging from excessive malware along with the software, embedded viruses and glitchy performance issues.

I then came upon an online screen recorder called "Screenr" which required no downloading, no sign-up and had rave reviews from several sources. Screenr allows you to capture up to five minutes of video per file and then to either save it on your own system in .mp4 format for editing, upload it to a host of social media sites or directly to YouTube.

I fired-up Perseus and then Screenr to gave it a try. The first thing that popped-up was an adjustable frame that allows you to size your video so that just the wanted subject is visible and any additional screen clutter is not included.

As a test, I made two recordings and uploaded them to YouTube. To my delight, it all worked quickly and seamlessly although it seems that I need to do further experimenting with my audio level settings.

The first video shows two new broadcast band catches that were logged this week, using the new loop pointed to the east. KRJO in Monroe, Louisiana (1 kW) and CHTO in Toronto (1 kW) both in the top-end of the band.

The second video shows my two favorite NDB-band propagation indicators... AA (365 kHz) near Fargo on the ND/MN border as well as little 25-watter, YLJ (406 kHz) in Meadow Lake, Saskatchewan. Either of these make fine prop indicators for the 630m as well and can be heard from both the east and the west parts of the country.

The bottom line is that Screenr seems to work extremely well and is an excellent way of saving some of your SDR catches for web or blog site posting. As well, it could be used for making voice-narrated instructional videos limited only by your imagination....it gets a 5 out of 5 from me!