Building For The 'BK' 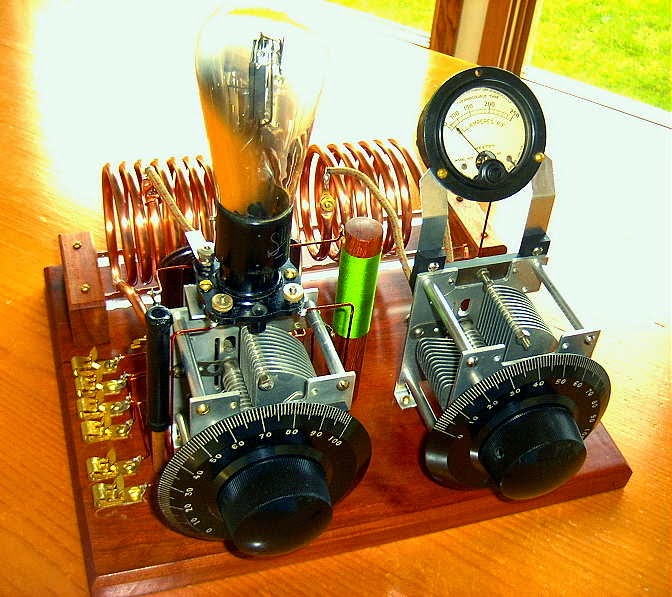 It's almost that time of the year when, once again, the '29ers start preparing for the winter Bruce Kelley Party. In case you're not familiar with the 'BK', it's a winter event celebrating the transmitters of 1929 and earlier. Transmitters used for the event must be self-excited only...no crystals allowed...and the tube(s) used must be those that were available in 1929 or earlier. It's an eye-opener to hear how the band must have sounded in the early days of amateur radio CW...even better if you're making those sounds yourself. The 'BK' usually spawns a flurry of construction, so if you think it is something that might interest you, you have until early December to get ready! Unfortunately many aspiring 29ers always leave it too late and inevitably run out of time before all of the building challenges can be overcome.

Over the next few weeks I'll have more to say about the 'BK' and '29 style in general, since this year, I hope to add an amplifier to my self excited Hull Hartley, shown above.

For now, I'll tease you with the basic information regarding the QSO Party as published by the 'BK' sponsor...the "Antique Wireless Association"......just in case you want to start planning an entry (hopefully!).


The Bruce Kelly 1929 QSO Party is a yearly AWA sponsored event where participants build their own transmitters using the designs, techniques, and tubes that were available in 1929 and earlier, and then put those classic transmitters on the air and try to contact as many other 1929 stations as possible.  Since they use early designs, it is a cacophony of whooping, chirping, buzzing, clicking, drifting, swishing, swaying, warbling, and other interesting signals.   This is what ham radio sounded like in 1929 and for two weekends in December its 1929 again on the ham bands.

This year for the first time we are activating Bruce Kelley’s W2ICE call sign as a 1929 SPECIAL EVENT STATION!  W2ICE hasn’t been heard on the 1929 QSO Party since Bruce’s passing so this will be a real treat to hear and work the namesake station of this event!   A special event QSL card will be available for valid contacts with W2ICE.  QSL information will be posted on the AWA website.  W2ICE is operating as a 1929 station and contacts count just like any other station.  The 1929 QSO Party was started in the early 1990’s and championed for many years by Bruce Kelly W2ICE, an AWA co-founder.  Prior to Bruce’s passing, he asked his close friend John Rollins W1FPZ to keep the 29 QSO Party going. John Rollins managed the QSO party for many years and renamed it the Bruce Kelly 1929 QSO Party in honor of Bruce.  Ten years ago John Rollins asked me to manage the 29 QSO Party for him and Bruce, and to keep the event alive because it meant so much to both of them.
Dates:  Sat. Dec. 6, 2014 @ 2300 GMT to Sun. Dec. 7, 2014 @ 2300 GMT and Sat. Dec. 13, 2014 @ 2300 GMT to Sun. Dec. 14, 2014 @ 2300 GMT
Objective:  Contact as many 1929 stations as possible.  Contact exchange consists of RST, Name, QTH (State such as ME or MN or NY), last two digits of the year of the transmitters design or publication (such as 29 or 27 or 23), type of transmitter (such as TNT or TGTP or MOPA or COLPITTS), and power input (such as 6W or 9W).
Rules:  Transmitters must be 1929 or earlier types of self oscillators such as the Hartley, TNT, PP tuned grid tuned plate, MOPA, Colpitts, etc.  No crystal oscillators.  Tubes must have been available during or before 1929.  Typical tubes often used are type 10, 45, 27, 211, 71A.  Individual stations can be worked only once on each band over the course of two weekends.  You can use any vintage or modern receiver that you wish.  The event is open to all 1929 stations including non-AWA members and AWA members.  You are encouraged to join the AWA and support 1929 radio!

Input Power:  Transmitters are limited to a power INPUT of 10 watts or less.  However, to help make East-West contacts, power may be increased to 20 watts INPUT between the hours of 0500Z (12 Midnight EST) and 1300Z (8 AM EST).  Note this is INPUT power.  Power input is calculated by multiplying PA plate voltage x total PA plate current.   Example:  my plate voltage is 300 volts dc, and plate current is 30 ma, so total input power is 300 x 0.030 = 9 watts input. Stations running more power than this are considered “modern” for this event and do not count.


Presently, almost all of the activity is from Minnesota and points eastward....the west is poorly represented for some reason but activity out this way has been slowly increasing over the past two years.
You don't need much in the way of power....every year I work several eastern 'BK' stations that are running just 2 or 3 watts, usually using receiving tubes pressed into RF oscillator service....much like the real boys of '29 likely did.

If you want to try something really different and relive the days of early amateur radio then you've still got time to get started. I have some helpful building hints on my VE7SL Radio Notebook site.
at 09:52