By all accounts, the little transmitter designed by GW3UEP and detailed on his website, is an efficient performer and would be a great 'first' rig for 630m CW. I had the chance on Thursday to run some checks with my GW3UEP xtal-controlled 630m transmitter. Typically crystal oscillators sound stable to the ear but when pressed into the slower QRSS modes where the signals are being observed in very narrow bandwidths, any drift caused by crystal heating will show up pretty fast. I think that anyone building this transmitter would more than likely want to use it for normal CW or perhaps as a beacon transmitter but being able to use it in some of the slow speed QRSS modes would offer significant improvements in geographical coverage compared with straight CW....but, would the little fifty-cent HC-49 crystal have the stability needed for the slower modes?

Previous on-air testing between G3YXM and G3NYK has shown the theoretical gains to closely follow actual gains when comparing CW speeds of 12 wpm with QRSS rates of speed. Simply going from 12 wpm to QRSS3 (3 second dots and 9 second dashes) will garner a whopping 12 db improvement at the receive end. Slowing from QRSS3 to QRSS10 yields another 7.6db. If the crystal controlled transmitter is stable enough at QRSS10, almost 20db improvement in readability could be realized....it would be the equivalent of staying on CW but increasing the little transmitter's output power from 25W to 2500W! This is one of the main reasons so much Low Frequency DX work is done in one of the various QRSS modes....to overcome the extreme inefficiency of most backyard antennas used for LF and the subsequent low effective radiated power.

Using the VA7JX 630m screen grabber, I was able to observe the stability characteristics of the xtal-controlled oscillator at various speeds as Jack followed along, switching his Argo receive speed to match my own.

As can be seen below, the oscillator stands up nicely at QRSS3 (3 second dots) while sending "SL". 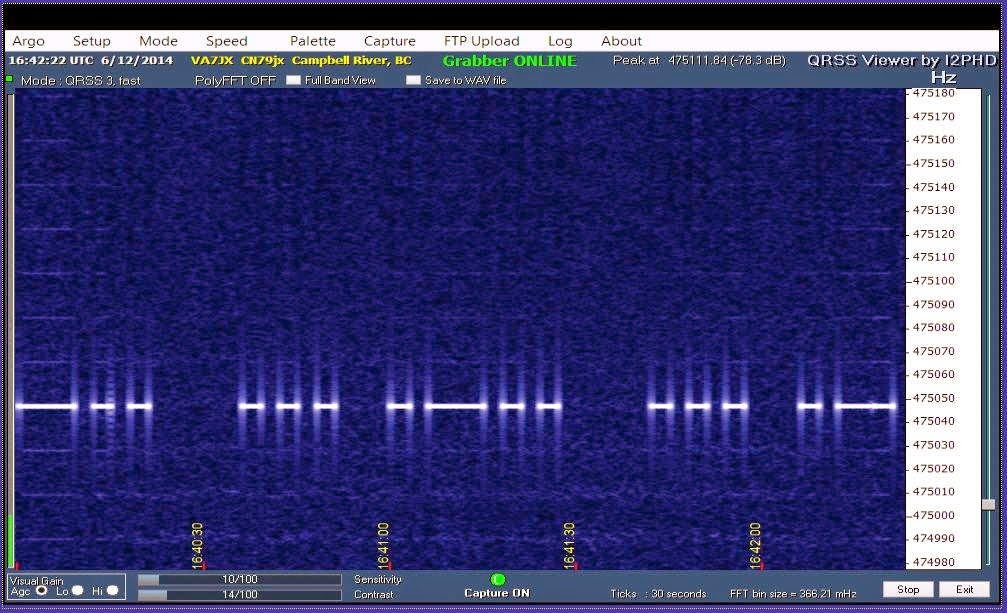 At this speed, we are now running the equivalent of 2500W on 630m at normal CW speeds but lets see if it will hold up at even slower speeds and to the scrutiny of even smaller bandwidth filtering. Here we are at QRSS20, giving another improvement of almost 2db or the equivalent of 3900W

At this bandwidth and long key down periods, the drift caused by crystal heating is now beginning to show up and although certainly usable at this speed, it would appear that anything slower than this speed would be even worse.

Moving down to QRSS30 will gain almost 2 more db, now at the 6200W normal CW speed. Although more drift is apparent, the signal is still easily readable.

In spite of the rigours placed on stability, the signal is still surprisingly useful although very 'chirpy' at this speed.

The huge improvement in effective equivalent power is of course realized at the expense of time, where just sending my call alone takes about 45 minutes! Two-way contacts have been made at this speed in spite of the time needed to exchange calls and signal reports. Faster speeds of QRSS3 or QRSS10 offer a much more realistic rate of exchange, allowing two-way QSO's to be completed fairly quickly, along with that very helpful 12-20db of signal improvement.

I didn't expect this small crystal to perform as well as it did but working in its favour is the fact that any actual drift in frequency is divided down by a factor of sixteen when going from 7.6MHz to 475KHz. As well, the method of keying used during the test was probably the worst one possible as far as stability goes as the entire 4060 oscillator was being keyed on and off for each sequence, requiring the crystal to constantly heat and cool for each character sent. Although keying this way is the easiest method, letting the oscillator run continuously and keying an intermediate stage such as the driver or the final itself should yield even better results.

In its present form, it seems that the little GW3UEP transmitter will stand-up very nicely in the faster QRSS modes, and would still be usable at the much slower ones if one was prepared to accept a little drift. With a different keying method and some Styrofoam insulation protecting the crystal, I suspect that further improvements at QRSS30 and slower could yet be made.