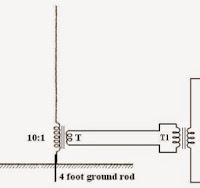 There's been a lot of discussion lately on the Yahoo Groups ndblist regarding the "low-noise vertical" (LNV) and it's seemingly excellent performance. Originally described by Dallas Lankford as a good performer from LF to SW, ndblist member, Phil (KO6BB), recently refurbished his earlier built 'LNV', but this time with better feedline and appropriate ferrite cores for the antenna's matching transformers. Some of his description appears below.


To recap. I put the LNV up last spring to overcome the bad IMD products
from local BCB stations I was seeing in the LF region when using the
Roelof Active Whip located about 36 feet AGL. The low noise vertical is
... about 30 feet of antenna, set at roof-line level in this mobile home. As I wasn't sure how well the antenna would perform, I first made it a "Zero Dollar" project, using items I had on hand. Those items included two toroid cores salvaged from a defunct computer PS. I figured that since the supplies operate in the kHz range (as witness what a dirty supply will do to your LF reception), they would be suitable for at least a trial run of the antenna. The balanced feedline was some CAT6 cable I had on hand.

The antenna was a great success, because while it had much lower signal
output than the active whip, it also had ZERO IMD from the BCB stations,
and also less local 'junk' (read noise). The tunable pre-amp I use more
than made up for the lower output of the antenna, after all Signal/Noise
ratio is EVERYTHING in this hobby, NOT how high you can make the "S"
meter read.

The central valley summer heat (often in the 100's) took it's toll on
the CAT6 feedline outer jacket insulation, and while it still seemed to
work OK, I figured that it wouldn't be long before water started to get
into the line and probably degrade it in rainy/foggy weather.

Anyway, I went ahead and ordered the proper toroid coils I needed along
with 25 feet of nice 300 Ohm foam twinlead, and got a couple plastic
boxes to put it all in and made the toroid units. While I was at it ordered
two Amidon FT193-J toroid cores to complete the LNV the way I REALLY wanted to.

Today I installed it all, putting a heavy twist in the feedline to try
to reduce any stray noise pickup on the balanced feedline. I'd say
probably not likely but why take a chance.

OK, here are the results. I took signal level readings of eight 24/7
stations, both before and after changing out the wiring/baluns. The
bottom line is, the new antenna IS an improvement in the NDB range,
tapering off slightly at the high end of the broadcast band. Yeah, it's
'only' a couple "S" units at it's best, but when you're digging for that
weak NDB even 1 "S" unit is a LOT! I'm going to 'assume' 6dB per "S"
unit as I have calibrated the "S" meter of the R-71A receiver.

NOTE: This is 'fuzzy' math, don't take them as 'exact' on the dB readings.

SO, it looks like the antenna is definitely an improvement where I'm
REALLY interested in it (the NDB band). I could have probably tailored
the toroids for maximum performance, but just used the 81:9 turns ratio
on the outdoors (antenna) and 9:9 on the indoor unit as I'm FAR too lazy
to run up and down the ladder to remove the toroid box, change turns and
retry it again!!!

NOTE 1. I have three ground rods dedicated to just this antenna, two 8
footers and a 4 footer. While I was playing with the antenna taking
readings AFTER the work, I disconnected one of the 8 foot rods to see
what effect that had. Signal levels dropped approximately an "S" unit
across the board. So GOOD grounding on this antenna does make a difference!

NOTE 2. I'm NOT exactly sure why it happened, but after the antenna
work here, there was even LESS "local grunge" in the background than
before, even with the stronger signals, making for even better copy on
weak ones than I otherwise expected. . . It DOESN'T make sense to me,
but then, antennas ARE the magic art.


It appears that the grounding plays some importance in the performance of this "non-resonant" aperiodic antenna and the fact that it is non-resonant on the frequencies of interest likely also plays an important part in its good S/N performance.

Several years ago I noticed something similar. My own 10' tuned air-core loop made an excellent receive antenna on 160m, even though the loop was tuned to around 300KHz! Although signal strength was several S-units below my transmitting antenna, the loop was extremely quiet and weak signals were much easier to copy ... In fact I often heard signals on the mis-tuned loop that I could not hear on my resonant half-sloper radiator.

Another ndblist proponent of the low noise vertical is John, in Colorado, who employs three ... one of them a great-looking tilt-over version. The tilt-over is nicely demonstrated in his short you tube video below.


The antennas are also used in combination via his Quantum Phaser, when DXing the broadcast band. The excellent phasing results can also be seen in his short video, while using a wonderful, like new,  Hammarlund SP-600 JX.


Dallas Lankford's original article may be found here, while an earlier more encompassing discussion will be found here. A third Lankford article, discussing 'Signal To Man Made Noise Ratios' and comparisons of various receiving antennas, also makes for interesting reading.

Perhaps the 'LNV' might be the antenna you're looking for to boost your LF/MW reception.

Adding 3, 50' radials spaced 120 degrees has resulted in a significant performance boost on my 25' RX vertical with impedance ratio of 100.

Built the LNV then added an approx. 80 turn loading coil and 2ft 3/8 in. tubing to the top also another 6 ft. to the bottom. Works fantastic with a 3ft pipe in mostly moist ground. No preamp. Best heard so far is SI on 279 Kc.

Hey Roy, nice catch considering how poor condx have been of late. Do you have any interest in getting on 630m by chance. VE4 is sadly missing from the band. You’d be a very popular fellow I can assure you!