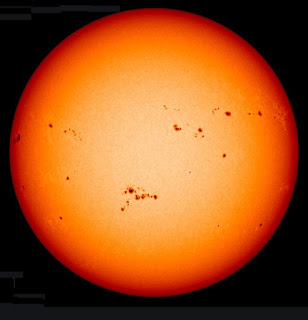 Unlike most forecasts for solar Cycle 25, a recently released paper from five solar scientists (1) has given many 6m diehards new reasons to hope!

After countless dire predictions for the upcoming cycle indicating similar or even poorer activity levels than the disappointing Cycle 24, the new paper suggests just the opposite!


In fact, the group of scientists predict that "Cycle 25 will probably be among the strongest solar cycles ever observed, and that it will almost certainly be stronger than present SC24 (116 spots) and most likely stronger than the previous cycle 23 (180 spots)." The possibility of a smoothed sunspot number (SSN) reaching as high as 305 is in the prediction!

Solar Cycle 19 was a monster, reaching a SSN level of 285 ... to imagine the possibility of something even stronger is truly exciting. The just-ending Cycle 24 was one of the weakest on record, reaching an SSN of just 116.


During Cycle 24, maximum usable frequencies (MUF) for F2 propagation often struggled just to reach 28MHz, and except for the peak year, the worldwide propagation conditions that amateurs had come to expect were often absent.

Should these new optimistic predictions come to pass, 6m operators can look forward to some truly, never-before-seen, fall and winter propagation ... for at least three or more winters.

With SSN values reaching the high two-hundreds or beyond, west coast operators can expect to see the 6m band often open before sunrise, most likely favoring Europe via the polar path or towards Africa via the trans-Atlantic path. Unlike 20m, there will be little to no ‘polar flutter’ and since signals propagating near the F2 MUF suffer very little path loss, they will probably be very strong.

Later in the day, propagation will shift south towards Central and South America before moving to the west. Depending on the time of year, the propagation will favor Asia, with signals from Japan, China and other far-eastern exotica in the early fall through the New Year. As well, the band will often stay open for some time after local sunset. Late winter and spring will see the western path favour signals from down under, and stretch out to the southern far east regions towards the Indian Ocean. These were the propagation patterns noted from here during Cycles 21-23, when SSNs reached 233, 214 and 180 respectively.

With much gratitude to Mark (VA7MM) for converting my old analog tapes to mp3, here is a recording I made on the morning of November 7, 1979, at the height of Cycle 21. It will give you a taste of what could be in store. On that Wednesday morning, the band opened around 0800 and continued through to sunset, closing with a three-hour opening to the Pacific and Japan. Like many other 6m operators, I had taken the day off work with a case of the 'F2 flu' that was very prevalent that winter! The recording begins with a short exchange between VE1ASJ and VE1AVX, while trying to work a very ‘rare’ (for them) KL7 ...


The graph of Cycle 21 shows when the recording was made. Although not known at the time, it was very close to the peak of the cycle.

A record-busting Cycle 25 will be like these previous cycles only on steroids! With such a cycle, 10m will follow a similar pattern but will likely be open 24/7 as I recall listening to VKs and ZLs on 10m AM well after midnight during the downward climb of Cycle 19 ... and this was on a very '10m-deaf' Hallicrafters S-38 and a short wire out the attic window!

For those wanting to read the fascinating paper (Overlapping Magnetic Activity Cycles and the Sunspot Number: Forecasting Sunspot Cycle 25 Amplitude), you can find a pdf here. As well, you can read the ARRL’s own announcement of this exciting possibility here.

One certainty is, that if FT8 is still around by then, it and your soundcard will fold up quickly once the band opens with wall-to-wall S9++ signals. It may be useful during the first early minutes or during marginal openings, but knowing the signal levels that 6m F2 can produce, it will be like trying to use FT8 with dozens of new neighbors operating on your own block ... and you can easily guess how well that might work! As we’ve come to understand, FT8 is a wonderful weak-signal mode, but throw just one bone-crushing signal into the waterfall and it’s game-over ... on F2, there will be dozens of these!

Such stellar conditions on 6m are ideally suited to CW or SSB and I think there will be a fast exodus from FT8 back to the traditional modes very early ... those that aren’t prepared for this, relying only on FT8, will most likely be in for a rude awakening. If you’re a 6m “no-coder”, now’s the time to hunker-down and learn CW ... by the time Cycle 25 becomes productive, you won’t be left out of the many CW DX opportunities that will surely be available on this much quicker QSO mode.


We will no doubt be reading more about this as Cycle 25 begins to grow. As in almost all stronger than normal cycles, growth from the start to the peak is much shorter than normal so I’ll be watching for a fast rise in sunspot numbers once we are really underway. 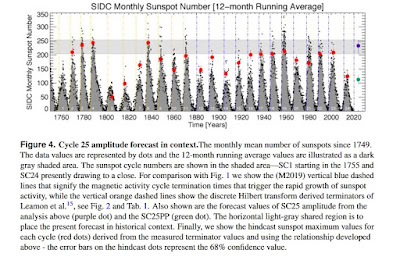 Hindcast modelling (backtesting) of the data derived from previous cycles going back to the 1700s using the paper’s prediction methodology, shows an accurate alignment with what actually occurred. The red dots in the graph above indicate the model’s predicted peak superimposed on the actual peak. In some cases, the peaks were even higher than the modelling suggested.

The predictions identify the so-called “termination” events, landmarks marking the start and end of sunspot and magnetic activity cycles, extracting a relationship between the temporal spacing of terminators and the magnitude of sunspot cycles. The success of these predictions will depend upon an upcoming terminator event before the end of 2020. Should it occur on time, the predictions will be given a much greater chance of coming to fruition ... "with a terminator event in 2020, we deduce that sunspot cycle 25 will have a magnitude that rivals the top few since records began. This outcome would be in stark contrast to the community consensus estimate of sunspot cycle 25 magnitude."

More interesting discussions of the paper can be found here and here.

This week's high-latitude Cycle 25 sunspots are a great sign. When the terminator event occurs, solar activity will ramp-up very quickly, within one 27 day solar rotation. Let's hope we're getting close.


As noted in the paper, "Very early indications of the spot pattern are appearing at higher than average latitudes. Historically, high latitude spot emergence has been associated with the development of large amplitude sunspot cycles — only time will tell."

Hopefully we’ll all need to hold on to our hats ... it might just be the ride of our lives!

I checked a few times to see if the publishing date wasn't April 1st.
I don't even DARE to believe this. But I sure hope it will turn out to be true.
I could use a shot of sunspots and 28MHz DX.

Thanks Franki but if enough of us old 6m guys believe really hard (ya gotta believe!!), maybe it will happen. It sure sounds better than what most expect. I’m being hopeful since it’s likely the last cycle I’ll enjoy while still having my teeth. The new Cycle 25 hi-latitude spots showing up right now are an excellent sign. I’ll be looking for you in Nov 2024 👍👍

Solar cycle predictions! Well, I'll take it with a big pinch of salt and come back in a few years, see what actually happened.

This may be the motivation I need to repair the final amp in my transceiver to back on 6 meters. Hope I live long enough to witness it. Anticipation is a great driver! 73. MK

I’m sure you’ll be around Markus. If it’s a big one, it will shoot up very quickly, so we should see by the end of 2020 how fast or slow it’s growing. Just thinking about a cycle larger than 19 is exciting as it was truly amazing...and I just caught the downside of it. Being new to shortwave radio, I thought this was just ‘normal’ propagation ... not!