Last week's favorable northern declination of the Moon allowed me two days of activity, once my moonrises had lagged far enough behind the early sunrises.

With fixed elevation and not having the ability to track the moon as it rises, I can only operate for about two hours before the moon gets too high. The highest elevation that I am able to work seems to stop near 20 degrees.

With QSLs from earlier sessions still arriving, I noted last week's activity was down somewhat from the previous month ... summertime activities usually take priority over EME for most moonbouncers. 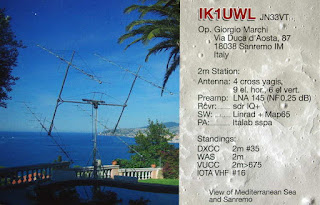 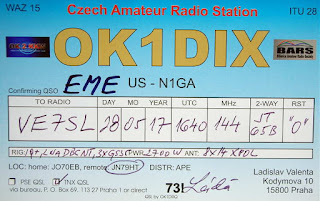 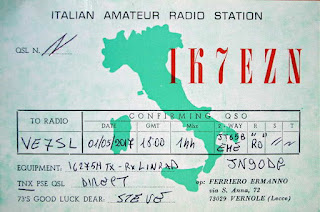 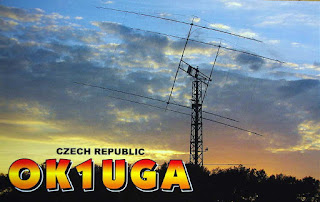 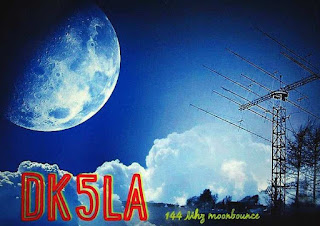 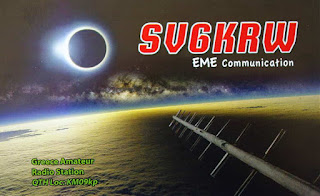 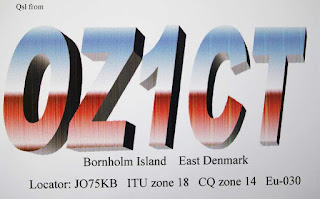 During my two mornings of moon time I worked five stations which included two new DXCC countries, bringing my 2m DXCC total to 30. Stations worked at the end of June were:

Interestingly, all of the stations answered one of my CQs, with one CQ having three different callers at one time ... pretty exciting and something that I don't think has occurred here before! But that wasn't the only excitement of the week.

In the middle of a CQ following my QSO with IK6CAK, I heard a faint 'crack' sound from my amplifier, an aging RF Concepts 2-135, followed by the unmistakable whiff of a 'too hot' electronic component ... every ham is familiar with this always unwelcome odor and it usually spells trouble. 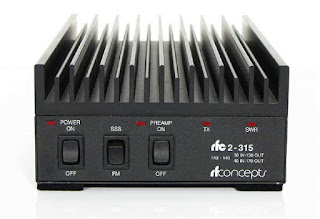 During the next CQ, I saw a trace of smoke coming out of the amp's back corner vent holes, at which point I reluctantly shut things down in the middle of some superb EME conditions.

After tearing into the amplifier, the only thing that looked stressed was a small inductor (L14 below), part of the output filtering / impedance matching circuitry. 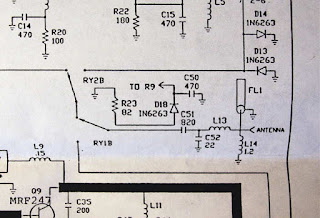 It looked a little darker and somewhat stressed and as I gave it a poke with a screwdriver blade, it immediately disintegrated into what you see below. 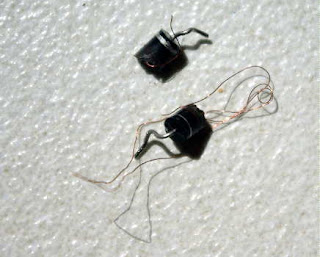 It was a small (1.2uH) encapsulated RFC which appeared to be wire-wound on a core material that I did not recognize and likely suitable for VHF. I surmised that after several years of 100% duty-cycle JT65 operation, the inductor had been over-stressed to the point of failure ... helping to filter all of those nasty high frequency harmonics can't be an easy job!

After a search of my RFC collection (see below), salvaged mostly from junked TVs, monitors, VCRs and other electronic cast-offs temporarily 'borrowed' for stripping from our local recycle center here on Mayne Island, I settled on a 1.2uH choke that I hoped would be a suitable replacement. It had just a few turns so I assumed it was wound on some sort of powdered iron or ferrite form. Whether or not it would behave at 144MHz was another question. 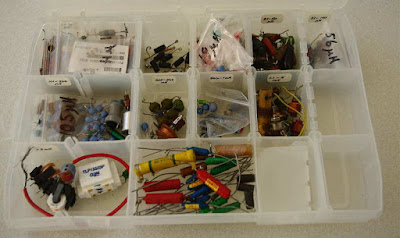 After reassembling the amplifier the following morning, I keyed up at full power during the EME window but halfway through my initial CQ I saw smoke and then flames coming from the inside of the case ... yikes! Shutting down immediately killed the fire and after tearing into the amp yet again, I saw that this time, the output coupling capacitor (C51) had completely destroyed itself. 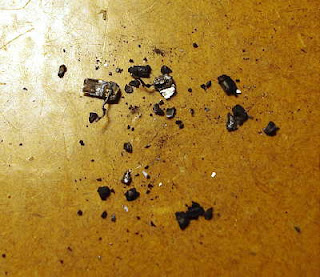 The new inductor (L14) appeared a little heated, but I assumed it was only smoke-damaged from the nearby flameout of the capacitor. I replaced C51, an 820pF silver mica, with a higher rated one of the same value and, once again, gave it the smoke test ... literally.

After a few seconds, a whiff of smoke appeared from the back of the amp, followed by the SWR trip-out kicking in and shutting the amp down.

This time it appeared that the inductor was definitely complicit in the destruction of the capacitor as it was charred and black. I surmised that whatever core material the little inductor was wound upon, definitely was not suitable at 144MHz and had caused the little inductor to either change value or to saturate ... whatever it was doing had created a highly reactive condition in the output circuit, changing the output load impedance and sending the SWR sky-high.

This time I replaced the inductor with a homebrew one, wound on a plain phenolic former, hoping to avoid any ferro-magnetic / frequency compatibility issues. After reassembling the amplifier, it seemed to be happy once again and ran nicely for several 60 second JT65B sequences at full power with no smoke or component heating!

By this time I had run out of favorable EME windows as my moonrises were now too far to the south to keep me away from the neighbour's trees ... I'll just have to be patient and wait until the end of the month for the next definitive test. Let's hope there's no more smoke.
at 12:22