I spent a few hours yesterday, operating in the 'RAC Winter Contest'.


Originally, this contest began back in 1932, when QST excitedly announced a 'Canada-U.S.A. Contact Contest' to run in mid-January of that year.

The contest turned out to be extremely popular and has been run, in one form or another, ever since ... gradually becoming known as the 'VE-W Contest', sponsored by the Montreal Amateur Radio Club, and eventually by its modern name, with one version in July and a second in December.

As a teen-aged ham, the 'VE-W Contest' was always the highlight of the year as the contest format, much as it is today, made anyone with a 'VE' call as sought-after as AC4YN ... not the one in North Carolina!

Old-timers and DXers will remember the call, as it represented the rarest of all possible contacts at the time and only a very lucky few made contact with the low-powered station, high in the Himalayan mountains at the British mission encampment in Lhasa, Tibet, in the late 30's. Having an 'AC4' QSL on the wall anointed you bragging rights for life.

Another great aspect about the contest back then, as in most, was that stations exchanged real RST's and not the meaningless '599' of today's contest operation. It was always interesting to learn how my little station, nestled in the upstairs attic, was really sounding at the other end.

I decided to set up my homebrew 'Tri-Tet-Ten', 6L6 crystal oscillator, and give the contest a short try. Being unable to conveniently move around the band meant that I would be reliant on stations answering my CQs ... not something that normally happens with the little transmitter in typical contest QRM ... but the magical 'VE' factor would change all of that, I hoped. 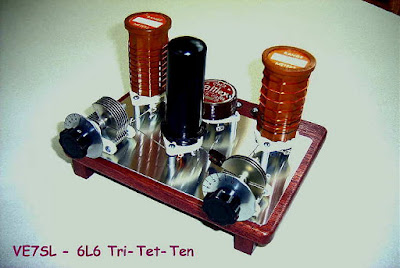 I plugged-in the 15/20m plate coil and got out my old homebrew RF-sniffer / wavemeter. It was the first piece of gear that I built, as a new 15 year-old ham, and the poor man's spectrum analyzer has been in constant use ever since. Using the 40m crystal's third harmonic, I have found the wavemeter is the easiest way to avoid mistuning and quickly found myself with just over 5 watts of RF ready to go. A tune-up for 20m later, found the second harmonic producing about 10 watts of pile-up generating madness. 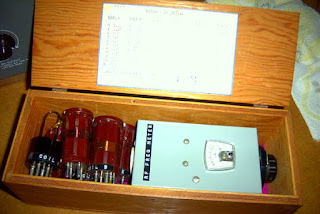 Nowadays, the rules have changed a bit, and 'VE-to-VE' contacts are worth more than 'VE-to-W' QSO's but for 'W's, the goal is still to work as many 'VE's as possible ... and call they did.

Over the period of a few hours, the Tri-tet did not disappoint, generating 206 callers, including PY, PJ and HP ... frequently generating pileups 4 and 5 deep. I didn't try 10m as by the time I got started, it was falling off and the 6L6's 4 1/2 watts of fourth harmonic output on 10m requires really good conditions to be heard very well.

Due to conflicts with other activities, this was the first RAC VE-W Party that I have operated in many years ... it's nice to see that apparently not much has changed since 1932!
at 13:40