It may not have been the YASME but the recent voyage of the HAKUNA MATATA had all of the radio fun that one might ask for during the mid-summer doldrums! (more later for those too young to recall the YASME)

Crewed by Mark (VA7MM) and YL May (VA7MAY), Toby (VE7CNF) and XYL Nancy, the 31' Benateu recently completed a 14-day circumnavigation of Georgia Strait's Gulf Islands. This is a yearly adventure that has been successfully completed for the past few summers and looks as though it may now be an annual tradition.

Normally, the crew kept up regular radio contact on HF as well as on VHF when possible but this year saw a major departure.

In previous summers, near the end of the voyage, the crew has always visited us here on Mayne Island for an afternoon of vittles and libation before heading for home. There is always a good amount of time spent recalling the past-year's radio activities, winter projects and reminiscence of the 'good old days'. Last year, just as the party was ending, I jokingly suggested that 'next year', it would be cool to work them from the boat on 630m.

Although there was no immediate commitment, I knew that the seed had been planted, and with three of the four crew being engineers, I suspected it might be hard for them to resist, and ... just before departure, the local bunch of 630m ops were put on alert to be watching for CF7MM/mm on 475 kHz CW as they would be attempting to work us from three different overnight anchorages during their summer voyage!

Evidently Toby had been working quietly during the winter to make this become a reality. Here are some pictures of the system along with Toby's (the system's builder) comments.

The antenna wire is 14 ga 38 ft long with plastic Unadilla "END-sulators" at each end. Ground was the boats's cast steel keel and a couple of 30 ft wires near the gunnels. The rig is an IC-746 with my power-mixer transverter. Transmit power was about 20W TPO.

Tuning and matching was done with a resistive voltage divider setup, signal generator, and portable oscilloscope. Once the matching was figured out, I could re-tune the variometer to give a dip on the transverter's RF voltmeter and check that we had the same RF voltage as with a dummy load connected.

The antenna equivalent circuit is approximately 100 pF in series with 27 ohms. Coil losses were 23 ohms for about 50 ohms total load resistance, so the matching autotransformer was not used. The base loading coil is approximately 170 uH and the variometer is 950 uH, for 1120 uH total inductance.

Some of the contacts are shown below. Note the transceiver is not really on 160m ... it's just the i.f. for my 630m transverter!

I was impressed with the strength of ground wave signals given the low transmitter powers and EIRP's well below 5W. Received signals ranged from S1 to S9+10dB and copy was easy for all QSOs. QSO distances ranged from 10 to 142 km. We had low receive noise levels in all locations, with Silva Bay being a little noisier than the others due to many nearby boats and some shore power lines.

We tried disconnecting the gunnel ground wires and leaving only the keel, and found that the antenna capacitance and resistance did not change. When we disconnected the keel and left only the gunnel wires, the antenna capacitance dropped to about 87pF and antenna resistance dropped by a few ohms. It appears that the keel provided most of our ground coupling to sea water and it would have been a sufficient ground on its own.

It would have been interesting to compare signal reports with different ground arrangements. Next time...

More details of Toby's 630m transverter as well as a practical 630m antenna tune-up procedure can be found on his website here.

All-in-all, I think the 630m operation was a great success and very likely the first-ever 630m marine mobile operation on that band, as I don't recall this happening anywhere else over the years. It was also a great way to pay homage to the band's original maritime heritage where its quality groundwave and skywave capabilities were used to advantage for so many decades safeguarding mariners worldwide. 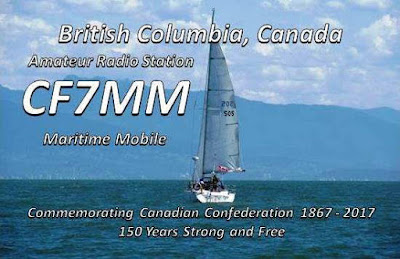 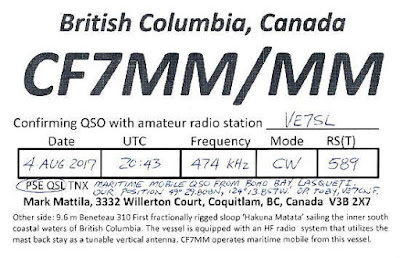 Maritime mobile operation on the amateur bands has some great history behind it, including the yacht YASME. In the mid-50's, Danny Weil was the first ever amateur to undertake DX'pedition style operations via sailboat, as he visited numerous rare islands in the Caribbean and South Pacific.


His exploits were regularly published in CQ magazine at the time and always made for exciting reading as Danny would eventually wreck three YASMES over the years! His adventures laid the groundwork for future island-hopping DX operations such as those undertaken by Gus Browning (W4BPD), Don Miller (W9WNV) and all that followed ... I'm sure they would all have enjoyed working the HAKUNA MATATA as well!
at 15:31

- Dan VE7DES (back from the eclipse)