I continue to be amazed at the high prices being paid on E-Bay for original Ameco AC-1 transmitters but perhaps I shouldn't ... they've been doing this for several years now.

Few radios that I can think of have elevated themselves to the cult status enjoyed by the AC-1, but the 3-tube Knight Ocean Hopper regen also comes to mind. Both radios typically reach $100- $200 on auction, with some going for much more. There were plenty of AC-1's sold and built over the years so it's not as if they're rare.

They seem to pop up frequently on E-Bay and the auctions are usually very spirited. I see a nice looking one at present, with 23 bids so far and now at $150! I guess the timing is just about right, with a large supply of now-retired ex-50's Novices who once owned an AC-1, looking to turn back the clock and recreate their early radio experience.

As transmitters go, they don't come much simpler, but the well-designed and smartly marketed radio made it extremely popular among the vast numbers of newly-licenced teenaged Novices who likely didn't have much spare change ... the first ones hit the market in the late 50's, right in time for the strongest solar cycle on record, selling for $14.95 in kit form. AC-1's continued to be sold into the early 70's with the price rising to around $25 ... a nice long run for most ham gear. I may be wrong but I don't think they were ever available in anything other than kit form. 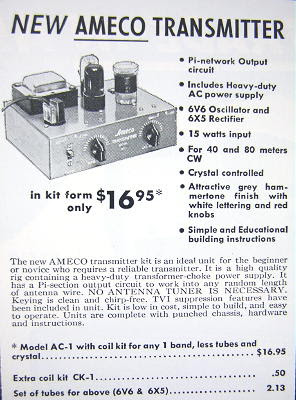 Here is what the kit looked like upon arrival ... this one still NIB in 2012!

It's not difficult to imagine the level of excitement that this would have stirred up with a young Novice, eager to get on the air.

Even today there is still a large builder's interest in making AC-1 'clones'. Several years go I decided to scratch-build my own clone and found that I had everything needed except for the gray hammertone spray paint which I found at Home Depot. Although most AC-1's used black chicken head knobs, some early models used maroon knobs so I decided to go with a red slide switch and red chicken head knobs on my reproduction. The important decal was available at the time from the Yahoo AC-1 group but I see them now being sold by Radio Daze, for those that may want to try their hand at building a clone themselves. 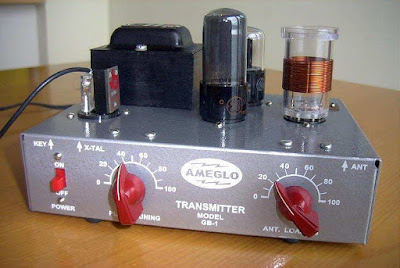 The AC-1 uses the inexpensive 6V6 elevated from AF to RF duty, in a crystal-friendly Colpitts crystal oscillator. The only departure from the norm is the output circuit. Most inexpensive one-tubers end up with a link-coupled output but the AC-1 uses the more versatile pi-network ... something that no doubt added to its production costs but produced a transmitter able to load a wider range of antenna impedances while providing improved harmonic attenuation, both important in a beginner's rig.

My clone puts out 8 watts on 80m and 7 watts on 40m. Although never intended, doubling to 20m sees a large drop in efficiency, with output power dropping to 2 watts. Swapping to a 6L6 yields an extra couple of watts. Not enough to be noticed at the other end except when doubling or tripling.

I haven't had my clone on the air for awhile and think it's time to spark it up once again for some  fun on 40m CW. It would be great to work another clone or even a real AC-1 if you have one, but any contacts will be exciting if you would like to try.

Here's an eye-opening experiment: Tune your AC-1/clone up for maximum output into a dummy antenna at 40 meters, and then make a note of its keying quality and power output. (As you know, some detuning from max-output is standard for best keying with one-tube-crystal-oscillator transmitters.) Now reduce the value of the rig's grid 1 resistor (47 k in the kit) to 5.6 k, and then rerun the power-output-v-keying quality measurements. Keying quality will be much better -- mine has no yoop at all with crystals larger than HC-6/U -- and power output will be higher. Wow!

Interesting Dave...will have to try that next time I have it out. Anyone else trying this, please post your results as well!