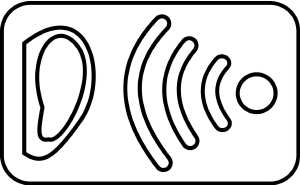 A recent posting on Yahoo's Perseus SDR Group inquired about the use of external or PC-based DSP manipulation of signals partially masked by noise to improve readability. The most interesting part of this short discussion was the result of one response indicating:

So ... the next time you find yourself trying to copy that ultra-weak signal just riding along in the noise, try turning the audio way, way down. Take a deep breath and listen to the tone, not the noise. If you ask me, the best signal filter is still the one between our ears.
at 16:09

Thanks fro your post. It actually confirms what I always thought when lowering the volume. Btw, it takes a few minutes before your ears (brain) adapt. And of course you need complete silence around you. 73, Bas

Thanks Bas. I have noticed that as well and should have mentioned it. If my ears take a sudden loud-signal hit, it takes a few minutes to return to normal sensitivity levels again ... kind of like walking from a bright room into darkness and having to wait for your eyes to respond accordingly.

Interesting topic. Something I didn't see mentioned was that when straining to hear the very weak simply closing your eyes will also help you "hear".

Seems the brain spends a great deal of it's effort processing visual inputs, reducing that sensory input allows the brain to use more effort in processing it's other inputs. Kind of the like the comments you often hear about someone who has lost their sight suddenly has an improvement in one or more of their other senses.

I bet many do this (closing their eyes) when trying to hear to those weak signals but don't realize that they have or even that they did.

Works for me, I do it all the time. I also turn down the volume and the RF gain to hear better too.

Graham - you are spot-on and as you say, I didn't even realize that I often do this without thinking about it as well! Another great tip for those that have not tried this. I will often sit back, eyes closed ... with light turned off, and listen to a weak ndb CW ident as I try to pull it out of the din. Thanks for the reminder / pointer!

I’m a speaker only listener – the speaker must be dead center for me and lowering the volume does not change my ability to copy CW tones in noise. Beat frequency and the bandwidth of the IF or AF filter do. I hear better with wider filter bandwidths as long as the receiver isn’t suffering IMD as a result of my filter selection and/or its strong signal capabilities or LO phase noise.


Hearing is ultra complex. I think of the apparatus of the inner ear much like an RF stage: affected by modulation of the anatomical structures; subject to phase response, resonance, dampening, signal-to-noise ratio, frequency response , bandwidth etc.

While much is hypothesized, spontaneous otoacoustic emissions , frequency discrimination, reduced modulation detection thresholds and frequency thresholds vary according to factors such as age and gender. Some research where subjects detected gaps in known frequency AF tones shows the type of background noise [ Gaussian versus white noise etc] and its bandwidth affected the ability to detect gaps in the audio tones. Sinusoid versus other distorted tomes may also be at play.


The effect of auditory load – how hard you are listening to some sound also affect some . For example, when concentrating on a radio show while driving, you may fail to hear a siren from an emergency vehicle.

Then, too, comes cognitive processing by the auditory cortex . What mysteries lie in how we process sounds inside the brain. Variations may occur with diseases and chronic conditions. Also, with training some subject can hear tones better -- this may be a cognitive factor.

It’s good to experiment to boost your copy, but hard to draw firm conclusions without solid data.

Thanks for your great blog!
Todd

Todd - Thank you for your kind comment. You do bring up many valid and interesting points. There is certainly much more to this than simply 'turning down the volume'! With the human-factor variation being so dominant, it would be a challenging task to gather data as well.
My comments pertain only to CW, which I probably didn't make overly clear. I think one thing for certain (and I say this with caution!) is that the difference in copiability between a speaker and a good set of headphones combined with low ear-impact volume levels, is the difference between night and day.