Toby, VE7CNF, successfully inaugurated his lightwave station earlier this week, on Monday night, completing a nice two-way CW contact between West Vancouver (CN89) and Mayne Island (CN88). The distance spanned was approximately 51km (32 miles), crossing atop the western edges of Vancouver and then across the Strait of Georgia, the body of water separating mainland BC from Vancouver Island.


The details of Toby's homebrew lightwave equipment are described on his web site here and are similar to the station at this end ... also described in earlier blogs. This was the same path covered in my two previous lightwave QSO's with Markus, VE7CA, described here.

Monday evening's weather was clear and calm but at this time of the year, true darkness is a long time coming. With a full-moon just a few nights away, the sky never did get very dark it seemed. I set up my end of the path late in the afternoon, just in front of the house. 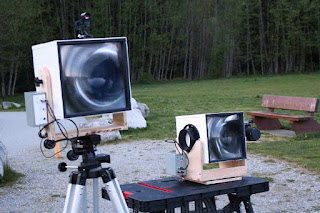 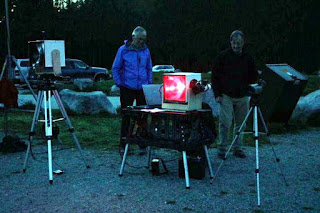 Accompanying Toby to the mountain lookout location were VA7MM, his YL VA7MAY and Markus, VE7CA who initially scouted out and found this nice site for our original lightwave contacts. Thanks to Markus who snapped a picture of the diehard lightwave crew!

One thing that I noticed on Monday night was the very loud QRM coming from the sodium vapor lighting used on the ski hills just above Toby's location. The resolution of my Fresnel lens was just not sharp enough to be able to isolate Toby clearly without also being saturated with the lighting noise ... from my end, the ski-hill lighting appeared just above his deep-red LED.

Although Toby's signal was very strong, the lighting hum was strong enough to cause some receiver front-end desensing and slightly modulate Toby's CW signal with a touch of AC ripple. I did not notice this hum when working VE7CA at the same location a couple of years ago. It's possible that there was no snow on the ski-hill at the time and the lights were not turned on.


Moving the receiver just a few degrees to the west made a huge difference, as the hummy background noise level returned to the quiet hush of a dark sky.

Toby's recording of my signal is much cleaner as there are no bright lights when looking towards Mayne Island. It is really interesting to hear the rapid fading, almost a flutter, on my CW signal, as the light passes through various levels of ever-changing haze above the water.


Midway through our one hour QSO, Toby reported that my signal had dropped measurably as had his signal on my end. Although I could see no obvious clouds in the path, I did notice a red glow out in the Strait that had not been there earlier. When I turned off my transmitter, the glow disappeared, indicating that there was indeed some low level haze that had crept up on us, and enough to cause some signal absorption on the path. Thankfully signal levels returned to normal, and actually were a bit stronger, about fifteen minutes later, when the haze thinned and the skies had grown a little darker.

Towards the end of our QSO, I had the chance to test out my #2 receiver. It was built so that I could do some NLOS cloudbounce testing here on the island, without having to separate my main system's transmitter/receiver pairing. At the time, there were no lenses available from the overseas manufacturer, so my quest for a suitable lens led me to a local 'bargain style' hardware importer (Princess Auto), who had a good supply of $5 lenses. The lens seemed to function well in my local tests but it had never been put side-by-side with the higher quality lens in my main transceiver. As it turned out, the $5 lens worked very well, easily detecting the 51km signal although it didn't sound quite as loud since the receiver I built for it was intended to interface with my laptop and lacked the additional audio amp I had built for the main system.

A final interesting observation was made, when on a whim, I placed a large cardboard shield over the bottom quarter of the transceiver's receiver lens. The signal strength didn't appear to change at all. I gradually blocked more and more of the lens but astonishingly, was still able to copy Toby's CW with all but a 1" strip of the lens completely covered! This would tend to indicate that we would be able to communicate with a very much smaller Fresnel or optical glass lens, such as a 4" or even a 2" inch magnifier. As I commented to Toby on CW, the possibilities for experimentation are endless.

All-in-all it was a very successful evening and the mountain-top gang seemed to enjoy the outing as much as I did, and ... the QSL is in the mail. 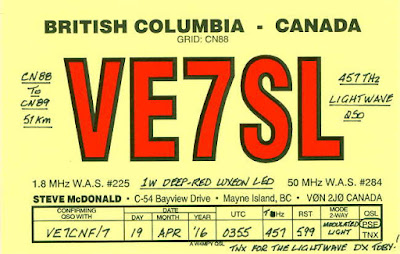 Hopefully there are other VE7's in or around Vancouver that might be interested in throwing a signal over this way some night ... I'll leave the light on for ya!
at 06:00

It is fortunate that in my area of the country we can choose paths that (largely) avoid light pollution, but in response to comments by Barry, G8AGN who was suffering badly from this I did put together a simple audio comb filter specifically to quash the racket that can be picked up.

It uses DSP techniques on a lowly PIC processor and is pretty effective - details here:

Thanks Clint. I recall seeing those when I was consuming your great site. For the most part, there are only a couple of nasty hot spots on the other side of the Strait but they happen to be near easy-access points. The hunt is now on for some quieter sites on the other side so I'm not pointing into the QRN.